Tertzakian: Oil Is Back — But, Post-Pandemic, Where Will It Come From?

This is the third in a series by Peter Tertzakian, Executive Director of ARC Energy Research Institute.

He’s right: oil is no longer being given away for free. For the first time since early April, benchmark prices have clawed their way above US$30 a barrel. But few would be convinced that THE NORTH AMERICAN OIL INDUSTRY IS BACK!!!!

The devastating effects of the pandemic-forced production shut-ins could put Canada and the United States on a regressive path toward dependency on “foreign oil,” a historically disparaging term.

Let’s flip the calendar back to 2008 or so. The United States had sent about 150,000 troops to Iraq, where the post–Saddam Hussein war was still raging. America was “addicted to oil,” as President George W. Bush had proclaimed. At the high point of U.S. dependency, in 2008, two-thirds of all imports feeding that addiction came from abroad.

Excessive dependency on foreign oil was also costly. A dozen years ago, oil prices averaged US$100/bbl. Daily foreign imports of 12.9 million barrels of crude oil and petroleum products were costing the country close to US$500 billion a year, a transfer of wealth that foreign petro-states were happy to ring into their treasuries.

Then came one of the fastest and largest energy transitions in history: the North American shift to shale gas, tight oils and oilsands. The combined U.S.-Canada supply growth of 10 million bbls/d, all in the span of a decade, pushed foreign oil out of the continent faster than Trump fires off tweets. Well not that fast, but in the 160-year timescale of the oil industry, the transition from foreign imports to near self-reliance was incredibly quick.

The details of how that happened are not as important as what was accomplished. By 2020, the United States reduced its foreign imports to only 40 per cent of consumption. From a combined team USA-Canada perspective, our continental reliance fell to a mere 20 per cent. In other words, Canada and the United States were close to being energy (oil) independent in the lead-up to the COVID pandemic, as shown in Figure 1. 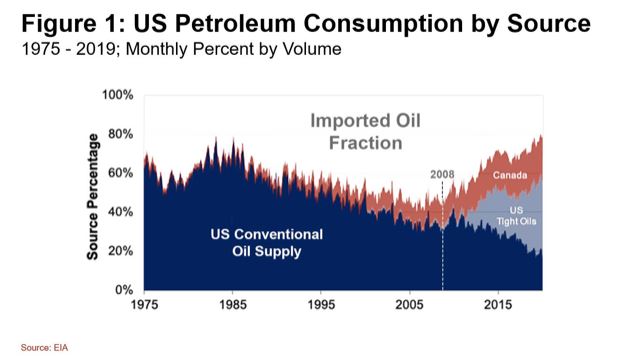 Being mostly self-secure in oil supply shields us from the possibility of foreign disruption, but the economy and environment benefit too. Keeping several hundred billion dollars of commerce within our boundaries helps trade deficits and creates tens of thousands of high-paying domestic jobs. Having oversight of environmental regulations is also vital to keeping tabs on climate change targets.

Now, the post-pandemic fallout could reverse a decade of energy security gains. Estimates vary, but more than 3.0 million bbls/d combined U.S. and Canadian oil output may be shut-in due to COVID-induced demand destruction. Cars are hitting the road again and petroleum consumption is rising; however not all North American production is likely to come back, even when oil sees US$50+ again.

Permanent impairment of some domestic oil supply is guaranteed. The only question — potentially a multi-trillion-dollar question — is how much? It’s too early to know, but a financial lens is needed to see the real root of the problem.

Pushing foreign oil out of North America over the past 10 years has been costly. Oil companies, backed by investors and banks, spent US$2.2 trillion to achieve near oil-independence. Cash flow, equity investment and debt paid for all of it.

Post-pandemic, all three sources of capital will be scarce. Cash flow by itself won’t be enough. Thirty-dollar oil may keep the lights on, but it doesn’t provide enough money to sustain flat production. Even fifty bucks makes it tough. Investment from Wall Street and Bay Street? That was largely cut off starting in 2018. And now access to debt will be scarce too — which bank will want to risk lending money to the industry after this catastrophic event?

In the absence of capital, shale oil production is likely to decline further over the next 18 months. Contrary to popular belief, oilsands won’t decline much, because the extraction process requires little capital to sustain output. Regardless, give it about a year and the demon of “foreign oil,” packed with its geopolitical baggage, will be knocking on the doors of North American import terminals — again.

It seems western society and its governments have relinquished that responsibility over the past 10 years, wanting nothing to do with oil. But it’s an important chin-scratcher, because North America is unlikely to shed its oil addiction anytime soon.

Regaining lost market share and flushing out our independence was exactly what the Saudis and Russians wanted when they started a price war 10 weeks ago. At the time, neither imagined the severity of the coronavirus. Now, as the pandemic eases, the losses to North American oil production are becoming evident. The opportunity for “foreign oil” is potentially even greater than they could have ever imagined. 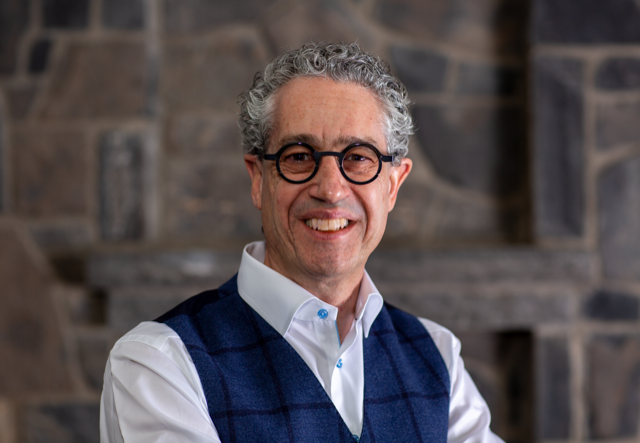 Peter Tertzakian is the executive director of ARC Energy Research Institute and creator of Energyphile, a project that looks to our energy past to help us understand the present and plan for the future. Visit energyphile.org to discover what a whaling journal, a child’s toy, one of Peter’s own photographs and other objects tell us about our historical oil dependence. Sign up to get regular updates and special content, including exclusive commentary from Peter.

Part museum, part library, part business school, Energyphile is the creation of respected energy pundit Peter Tertzakian. This multimedia project invites you to use stories from our energy past to understand the present and plan for the future. Think of it like a deconstructed business book. Short stories, object vignettes, discussion guides, a podcast and an interactive energy museum offer many different ways to explore our energy story. Designed to spark robust discussion and critical thinking, Energyphile will get you thinking about the business of energy in a whole new way. Get started at energyphile.org.