In early March, an LNG event was held in Toronto on the theme of “Elevating the Eastern Canadian LNG Conversation: Major Projects, Investment & Market Analysis.” The event was supported by the Government of Alberta, and organized by Glacier Media (the parent company of the Daily Oil Bulletin), the Canadian Society of Unconventional Resources and dmg events. The event was sponsored by Bennett Jones, DGSC and Promotion Saguenay. The venue host was Trayport Limited, a wholly-owned subsidiary of TMX Group Limited.

Canadian investors seem to have a lower risk tolerance than their American counterparts, which is why U.S. LNG players are generally more willing to put forward pre-FID capital for major projects, says Greg Kist.

“They’re willing to take that risk, but it’s going to cost us something to do that. That’s the balance we have to have,” the Rockies LNG Partners president and CEO told a recent Canadian LNG conference held at the Toronto Stock Exchange. He added: “We’ve been across this country talking to investors about the at-risk development capital, and coming in with us early there’s just been no uptake.”

Jason Kearns, director of commercial and business development, Enbridge Inc., said the “at-risk period” is such a hurdle for Canadian investors right now because the period is long and the magnitude of capital is very large. Also, in the Canadian context regulatory approvals are no longer the last step on a project, but are instead the first step. “That’s a pretty important change that definitely impacts how you can attract capital.”

Long-term, Kist said, Canadian investors will be part of these projects, once proponents get through all of the associated risks and into an infrastructure build-out stage. “It’s just not at this [pre-FID] stage that they seem prepared.”

During the event, Vivek Warrier, partner, co-head of the energy and oil and gas industrial team at Bennett Jones LLP, moderated the session on infrastructure build-out and ESG-related investment. He said Canadian LNG not only provides opportunity, both in terms of the catalyst for Canada’s domestic natural gas industry on both coasts and the economy as a whole, but also in terms of the role Canadian gas can play in combating global climate change.

While there are “discussions of the potentially transformative effect the emergence of a dynamic domestic LNG industry” might have, he added, “equally massive are the capital needs for developments of this sheer scale.”

On the ESG front, Kist noted that not only is Canada’s LNG greener than other sources of energy, but Canadian natural gas is among the cleanest produced. “We certainly hear about technologies and innovations that are brought,” he said. “The standards for development in Western Canada are the best in the world.”

Regarding ESG initiatives, he highlighted the First Nations Climate Initiative as “extremely positive in terms of LNG having a bright future.” Formed in September 2019, the initiative includes the Haisla Nation, Lax Kw’alaams Band, Metlakatla First Nation and the Nisga’a Nation. Their vision is to help limit global warming while Indigenous communities prosper and B.C. leads a low carbon economy.

“It’s a group of four nations on the West Coast of British Columbia — nations that oftentimes haven’t worked well together,” Kist said, adding the B.C. government is listening to them, and so these nations certainly have an ability to influence policy. “These are pro-development First Nations that are eager to find ways to bring these developments in and ensure they are sustainable and environmentally sound.”

For its part, Rockies LNG is a group of natural gas producers who have aligned together to find a producer-led, collaborative LNG solution for the WCSB. The Rockies LNG solution: Floating liquefaction, storage and offloading. Proponents had viewed 2027 as when they hope to have that first barge in place, which means Rockies LNG would need an FID sometime in late-2022.

Kist said: “We think this is a third-generation project. It’s a project where the producers ultimately take the price risk. They have that price risk today in Western Canada, and they’re prepared to take that in an international way.

“The producers in aggregate have committed 1.3 bcf per day of gas to this project. We think we need about 1.8 bcf per day to get a project off the ground.”

In terms of capital required for major LNG infrastructure, he added, producers must fund capital requirements to continue to supply gas to an LNG project for several decades, and so they might not want to necessarily also invest in pipelines or terminals. “And so, we need partners to help work with us to move these projects forward.”

Why Canadian LNG and ESG matter

Key Canadian LNG markets in Asia currently would not be willing pay a premium for ‘green’ LNG or LNG produced with higher ESG standards, noted Kist, simply because it is a buyer’s market. However, “at the end of the day,” the value of LNG is its ability to improve lives in developing economies where people are not as worried about climate change as they are about local air quality. “Clearly, it’s a place where Canada can have a significant positive impact.”

According to Kearns, the combination of low GHG-intensive natural gas and renewables is a way to move towards a much lower GHG footprint in the world’s energy mix. For its part, Canada offers the world its substantial natural gas resources that can help to facilitate this transition.

“When we think about exporting Canadian gas to Asia, there are a few things that are pretty unique to Western Canada. With the Montney, you’re talking about something that’s on the scale of a new discovery.

“It almost feels very early life cycle. However, it’s happening in a basin where you have experienced producers and operators, very experienced regulators both federally and provincially, both in Alberta and B.C. And so, we’re not starting from scratch when we talk about building out the industry. We’ve been doing this for 40, 50 or 60 years. For every kind of problem, we’ve just about seen it and solved it.”

As for developing a supply chain for global LNG, he said, building in the opportunity to keep increasing ESG performance will be important in the future, as there could be a time when it makes natural gas more valuable.

“In terms of how you attract capital, ESG performance will be an important factor. We’re seeing it already. It’s also going to depend very much on the commercial models we’re seeing and how much risk is embedded there. We do still see a strong appetite for projects with modest returns and low-risk structures to them. And so, that’ll be important.” 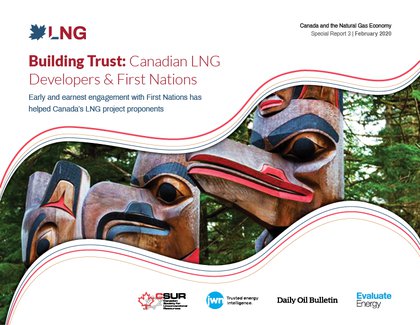