Phil Fontaine, living legend and former three-term national chief of the Assembly of First Nations (AFN), has said on numerous occasions that reconciliation is not possible without narrowing the economic gap between Indigenous peoples and the rest of Canadians.

The federal Liberal government is well on the way to narrowing this gap, not by increasing the standard of living of Indigenous peoples but by lowering the living standard of all Canadians.

Speaking at the World Economic Forum in Davos, Switzerland, in January 2016, shortly after becoming prime minister, Justin Trudeau said: “My predecessor wanted you to know Canada for its resources. I want you to know Canadians for our resourcefulness.”

A nice thought, if not for the crumbling of Canada’s industrial base — GM recently shuttering its Oshawa plant and Bombardier retrenching to become a mere maker of corporate jets the latest in a long line of setbacks on the automotive and aerospace fronts — and natural resources having become our country’s predominant driver of economic growth and exports over the past two decades.

That is despite federal government policies continuing to favour manufacturing, especially at times of crises, and obstructing natural resource development since the Liberals gained power in October 2015.

The Trudeau government’s apparent route to reconciliation with our Indigenous peoples will further harm the Canadian economy in general, and natural resource development in particular.

Likely out of fear of harming reconciliation, the Feds have taken a timid approach to ending Indigenous-led blockades of railway crossings and ports across Canada — in support of the Wet’suwet’en hereditary chiefs opposed to the Coastal GasLink natural gas pipeline crossing their unceded land in northern British Columbia — forcing the police to play whack-a-mole. As they end one blockade, one or more pop up elsewhere.

This makes it difficult to estimate the potential negative impact of the blockades on Canadian economic growth in the short term, but economists tend to expect it to be relatively modest. For example, RBC Economics is forecasting it to shave 0.2 percentage points off of first quarter GDP growth, since the bank argues Canadian National (CN) can make up much of the backlog quickly by adding extra crews and trains based on recent experience — although the bank warned the negative impact on growth would be greater if the blockades persist.

However, on Feb. 27, federal Transportation Minister Marc Garneau appeared to contradict this relatively optimistic thinking on short-term economic impacts, when he said it could take weeks or even months to deal with the backlog once the rail blockades come to an end, with their end nowhere in sight.

In the longer term, potential economic damage could be much more severe. The vulnerability of our freight networks to blockades, and the timid response by the Trudeau government to end them, has further damaged Canada’s reputation as a place to invest and do business. Alberta Premier Jason Kenney said this may have been a factor for Teck Resources suddenly withdrawing its regulatory application for the Frontier oilsands mine on Feb. 23, days before a federal cabinet decision on the project.

Douglas Porter, chief economist at BMO, said Canada has not seen long-term damage to its global reputation as a reliable supplier of goods from a strike or similar action in the past, but other countries have when the protests and strikes have been extremely widespread and disruptive.

Making matters worse, to “help” the process of reconciliation along, the Trudeau government is planning to introduce legislation this year to make the United Nations Declaration on the Rights of Indigenous Peoples (UNDRIP) law. This has the potential of providing a vocal minority within the Indigenous community — and their anti-development allies — veto power over new natural resource projects and related infrastructure in Canada, without having to resort to protests and illegal blockades.

Declining living standards for all?

Movements in Canada’s current account, foreign debt, and the Canadian dollar are good indicators that the federal government’s economic policies have been misguided in recent years. As can be seen in Figure 1, Canada’s current account balance has shifted from moderate surpluses prior to the Global Financial Crisis to large deficits since. 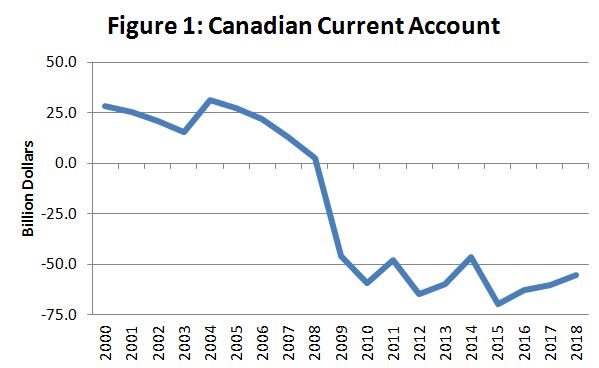 Canadians living beyond our means have contributed to the country’s foreign debt more than doubling from 57 per cent of the country’s economic activity in 2007 to 116 per cent in 2018, and our dollar dropping from US$0.93 to US$0.77 over the same timeframe — the Canadian dollar is presently below US$0.75.

Despite the federal government, along with the Ontario and Quebec governments, funneling billions of dollars into the country’s automotive and aerospace industries, the transportation equipment sub-sector — the largest within the manufacturing sector — flipped from trade surplus to deficit as of 2008 (see Figure 2).

In contrast, the mineral products sub-sector — the largest within the natural resource sector, and including oil and gas — has seen its trade surplus trend higher since 2000. And this is despite the federal government providing no financial support to the Canadian oil and gas industry at times of low oil prices — Global Financial Crisis; 2014-16 global oil price crash; and 2018 western Canadian oil price crash — and implementing numerous policies detrimental to natural resources in general, and oil and gas in particular.

The option of exporting Canadian oil from lightly populated northern British Colombia — instead of the densely populated Vancouver region — to Asia using economical supertankers was closed with Bill C-48. Alberta Senator Doug Black and many others have argued that Bill C-69 could be highly detrimental for natural resource development in Canada. 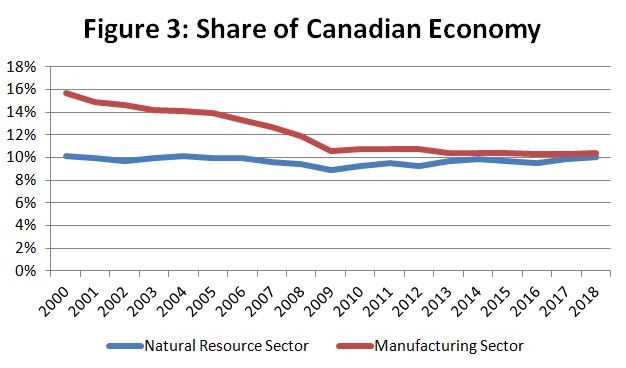 More importantly, the natural resource sector’s share of Canadian exports has increased 14 percentage points to 42 per cent over this period, whereas the manufacturing sector has collapsed 16 points to 29 per cent (see Figure 4). 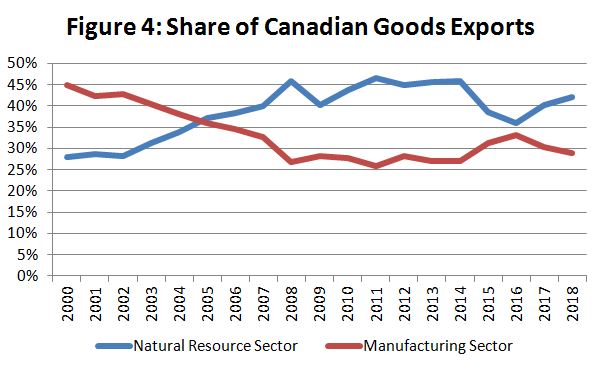 To conclude, Canadians have been living beyond our means since the 2008-09 Global Financial Crisis. If our economic prosperity is to continue, the federal government must stop hindering development of the natural resource sector, the key driver of our country’s economy, even in the mistaken hope of supporting reconciliation with our Indigenous peoples.

Rapidly rising foreign debt is not a problem, until it becomes a problem, something formerly wealthy Argentina learned the hard way last century (see Argentina’s Cautionary Tale For Canadian Economy).