North American oil and gas producers have had to increasingly bring capital spending into line with their operating cash flow over recent months, as they are facing growing pressure to address debt levels and appease shareholders.

This was a key takeaway from new analysis by CanOils on the capital spending levels of 57 Canadian producers. Oilsands operators were excluded from this analysis (click here to see our analysis on oilsands spending).

“The non-oilsands focused players in Canada are facing continuing headwinds. There is tremendous pressure for these companies to generate free cash flow to pay off debt and buy back shares,” said Bemal Mehta, senior vice-president of Energy Intelligence at JWN, who presented an analysis of this CanOils and Evaluate Energy data at a recent event attended by Government of Canada representatives. “We expect that the focus on capital discipline will continue into 2020.”

There is a similar trend — for similar reasons according to Mehta — in the same time periods in the U.S., looking at Evaluate Energy data for an equivalent group of 67 producers that excludes any companies with significant non-E&P operations.

The relationship between capex and operating cash flow has not reversed here yet as it has with Canada’s producers, but a decline from a recent high of 178 per cent of operating cash flow invested as capex in 2015 to just 106 per cent and 111 per cent in 2018 and 2019, respectively, is a clear and recent trend towards greater capital efficiency. 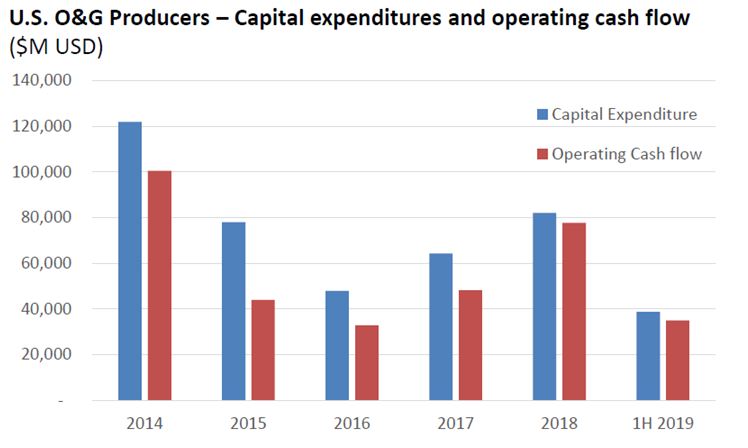