New analysis from CanOils shows that just 51 per cent of the operating cash flow generated by Canada’s major oilsands producers has been reinvested as capital expenditures in the first half of 2019.

This is a new low point in a recent trend that has seen the six producers — Canadian Natural Resources Limited, Cenovus Energy Inc., MEG Energy Corp., Husky Energy Inc., Imperial Oil Limited and Suncor Energy Inc. — move away significantly from a historic focus on capital spending as the group’s main use of cash.

Between 2009 and 2016, the group never recorded capex levels below 88 per cent of their combined operating cash flow on an annual basis. Since the price downturn, however, things have changed dramatically. In 2017, the group’s combined capex was 64 per cent of operating cash flow. In 2018, the figure fell to just 54 per cent and CanOils’ data from the first half of 2019 suggests that the fall will continue this year.

“Capital investment by oilsands-focused companies is on track for a year-over-year decline in 2019,” said Bemal Mehta, senior vice-president of Energy Intelligence at JWN, who presented this CanOils analysis at a recent event attended by Government of Canada representatives. “Once [oilsands] projects are operating, the operators can produce significant and sustainable free cash flows. The challenge is that growth capital will be on the sidelines until there is confidence about market access.”

A deeper dive into the data shows that since 2016, oilsands producers’ focus has shifted away from capex towards an increase in repaying debt and repurchasing stock. (Dividend payments — the other significant use of cash for the group — remained relatively consistent with pre-downturn levels.) 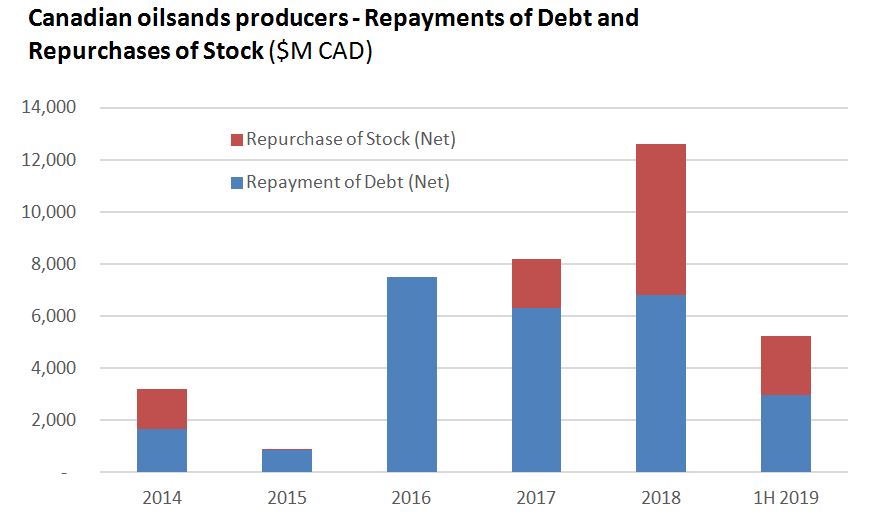