In Part 1: Living in a Harsh World we began to frame the challenge facing industrial producers around the world and began to set the table for Alberta having the potential to be a leading home for future investments in an emissions-constrained world.

In Part 2: Carbon Capture, Utilization and Storage we looked at some of the components of “clean-tech” that supports this future. We also provided sidebar discussions on geological storage of CO2 and on the scale of industrial carbon capture projects and their impact relative to an equivalent utility-scale wind project.

In this final part I discuss the growing trend toward low-emissions industrial clusters, and how this offers opportunities to reduce the risk and cost of CO2 management. For years I have discussed the opportunity for implementation of such a system approach in the Alberta Industrial Heartland east of Edmonton, pointing out that we already have some key elements. Looking at the global landscape and the speed with which various countries are committing to and investing in this type of approach, the opportunity for Alberta to be a leader here is slipping away. We are at risk of losing the advantage that we may have gained through the foresight of investments and commitments made a decade ago.

At risk, but the opportunity is not gone if we act quickly.

Industrial clusters incorporate infrastructure for transport and storage of CO2 throughout a region in which there is a relatively high concentration of emission sources. The transport system is tied to one or more deep storage sites, enhanced oil recovery (EOR) plays, and other CO2 users.

By aggregating sources and uses, new emitters coming onstream need only concern themselves with the investment associated with capture of their own emissions and interconnection to the CO2 collection/transmission system. This is sometimes referred to as a “herring-bone” arrangement. As more users come onto the system the rate of injection into deep formations reduces. If one plant shuts down, or a single EOR field stops operating this does not represent a threat to the overall system. Further, the impact on the overall economics of the system may improve or degrade over time, but only incrementally.

Critical to getting these clusters operational is the “first fifty miles” problem. While there are different ownership and financing models, typically some sort of government support is required to establish the backbone of the herring-bone. Also, it is necessary for an anchor tenant with a long-term, reliable contract be established to justify the infrastructure investment.

The other component that is required is a deep sequestration site to act as a sink to handle swings in the balance between captured emissions and utilization sinks on the system.

Key to the benefit of aggregating sources and sinks in a cluster is the enhanced ability to ride out multi-decade trends (for example see Figure 1: CCS vs CCU – carbon capture and storage vs carbon capture and use ) in each of the sectors and individual players requiring a robust system to tolerate the short- and long-term shifts. Note the relative scale of CCU (CO2 conversion.) 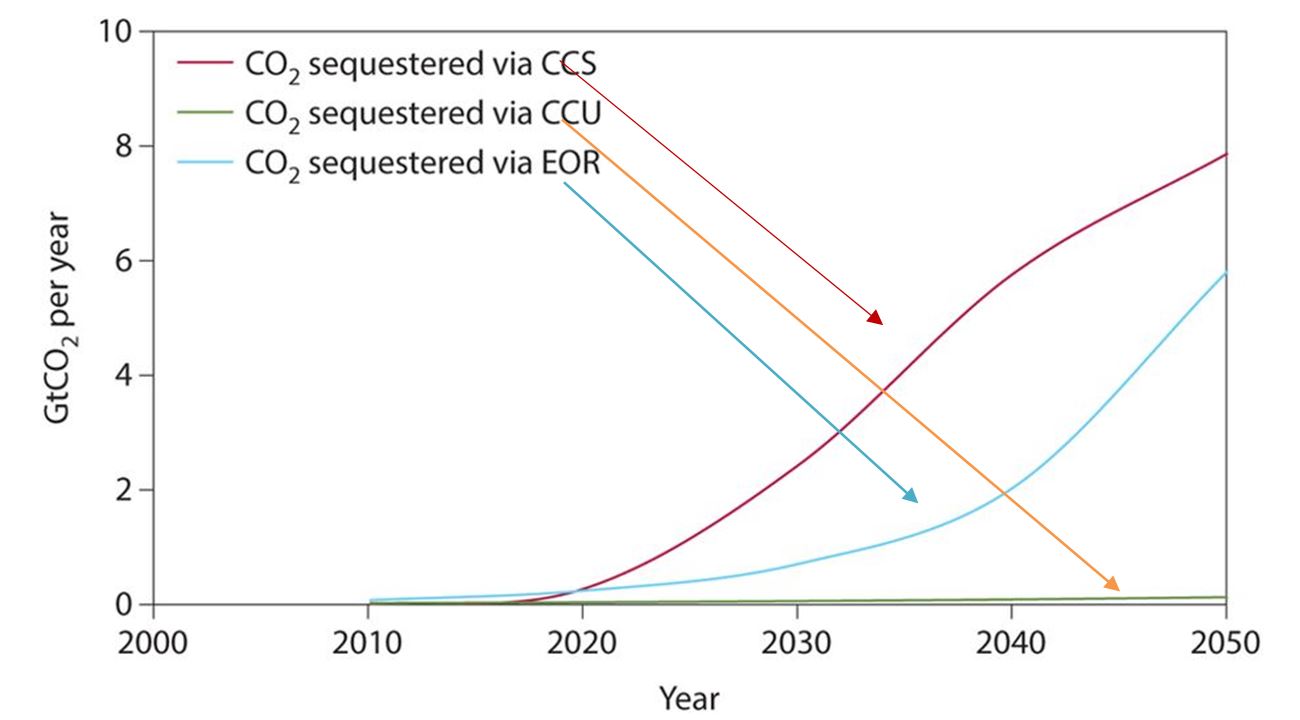 Norway, Holland and the U.K. are taking ever more aggressive actions to establish functional full-cycle low-carbon industrial clusters. Each project addresses the challenges uniquely, according to their specific geographical, geological, industrial and political strengths and barriers.

In the U.K., the climate challenge is dominated by many smaller sources in urban centres and a few industrial regions. Here the government has declared that the transportation and storage of CO2 should be treated similarly to other national infrastructure such as motorways, electric grid and gas pipelines, while capture is to be handled separately (U.K. House of Commons Business, Energy and Industrial Strategy Committee, 2019). The anchor-tenant issue is proposed to be solved both at entrance to city distributions systems (H21 Leeds City Gate project) and in industrial clusters (such as Teeside though not exclusively) by carbon capture from natural-gas to hydrogen conversion processes, then using the hydrogen for residential, commercial and industrial heat-sources. There is currently a competition among at least five regional prospective clusters for funding. An extensive network of pipelines, onshore and off, is proposed to deliver CO2 offshore for deep sequestration in spent oil and gas wells and for EOR.

The Port of Rotterdam, Porthos project (https://www.rotterdamccus.nl/en/), proposes over 30 kilometres of CO2 pipeline collecting from a range of industrial sources, supplying to greenhouses, and ultimately sequestering between two and five million tonnes of CO2 per year offshore in spent gas formations in the North Sea. They have had a strong response to request for Expressions of Interest process from more than enough companies to proceed to the next stage of the development process.

In Norway, the Northern Lights project (http://bit.ly/2WWfECS) involves capture from the NORCEM cement plant in Brevik, and a Yara waste-to-energy project. Both projects are at tidewater on the east side of Norway, allowing the CO2 to be transported by ship to the west coast near Bergin where it will enter a pipeline connected to offshore sea-floor wellheads for sequestration in deep saline formations. This ship-based gathering system at first seems complex, but it allows for greater flexibility and expansion. For example, Norway is hoping to become a disposal centre for emissions from throughout Europe. NORCEM’s parent, Heidelberg Cement, is now reviewing other plants on tidewater in Germany, Latvia and elsewhere to evaluate their suitability to join the project.

In Alberta’s Industrial Heartland we have a start on the backbone of the herring-bone system in the form of the Alberta Carbon Trunk Line operated by Wolf Midstream. The anchor tenants are the NWR Sturgeon Refinery and the nearby Nutrien Redwater fertilizer plant, while Enhance Energy will run an EOR operation near Clive, Alta.

We also have a deep sequestration project with multiple injection wells. Unfortunately, this operates as a separate and independent carbon capture and storage (CCS) site. The Shell Quest project sources CO2 from the Scotford refinery and transports it by pipeline to several injection wells to the north (of which only one is used at a time), injecting it into the deep Basal Cambrian Sands saline formation.

While the two pipelines run within a stone’s-throw of each other, they are not interconnected, obviating the potential benefits of an integrated system.

The early promising start in Alberta that began more than a decade ago — getting out in front of the global trends — resulted in considerable political backlash from all political sides, especially those focused on scoring points on their political opponents. Since that time support for effective, large-scale industrial policy has not been evident from any party, federally or provincially. Whether the investment was too early or could have been handled differently it was made. We can choose to turn it to our advantage and move forward aggressively. Or, we can watch the value of those early investments fade.

As the rest of the world seizes on our learnings from the early projects and those of the Boundary Dam project in Saskatchewan, builds on those precious insights, and presses forward, converting them into platforms to attract the next generation of low-carbon-emissions industrial investments, will we find ourselves sitting on the sidelines, complaining of having been misunderstood? Or will we choose to take the steps necessary to return to a leadership position and attract industries that can use our natural resources as input, produce high value products, and use our unique geological and human resources to embrace a low-carbon-emissions future?

Stay up-to-date on the latest in technology with the DOB's exclusive technology section.