The federal government has approved the Trans Mountain pipeline expansion and has committed to return every dollar earned in income and any profit from its sale to investments in clean energy projects.

Given the interest of Indigenous groups in obtaining an interest in the pipeline, the government also announced it has launched a consultation process about the next steps with 129 groups in Canada. It also will be consulting with other interested parties.

The government said it is satisfied it has met the consultation requirements with Indigenous persons as required by the Federal Court of Appeal when it quashed the previous approval in August 2018.

“There will be shovels in the ground this construction season,” Prime Minister Justin Trudeau said in announcing the government decision.

While the Alberta government is happy with the federal government’s decision to approve the Trans Mountain expansion project for the second time, “it isn’t a victory celebration — it’s just another step in a process that has frankly taken too long,”  Alberta Premier Jason Kenney said Tuesday.

“And that’s why we’ll measure success not by today’s decision by the beginning of actual construction, and more importantly, completion of the pipeline,” he told a news conference. “Now let’s get it built.”

Kenney said his government will do everything that it can to support immediate construction and real progress. “This is now a test for Canada to demonstrate to the world that we are a safe place in which to invest, to create jobs and build infrastructure,” he said. “This is a test for whether Canada is an economic union where we can dream big and still do big things.”

But whether work will substantially start on the expansion in time for the federal election campaign in October remains to be seen. Eight new accommodation measures to address First Nations concerns are now part of the approval, and there is some question on how much those new measures, which might even include some rerouting, may delay the project from restarting.

The announcement was presaged by the arrival by rail of tonnes of steel pipe at strategic locations along the pipeline route a week earlier. Trans Mountain confirmed about 30 per cent of the pipe has been delivered to sites along the route, including B.C.’s Lower Mainland.

Martin Olszynski, associate law professor at the University of Calgary, expects environmental groups and the Tsleil-Waututh First Nation will again challenge the governor in council (GIC) order approving the expansion at the federal Court of Appeal and argue that the second approval, like the first, was somehow deficient.

Whatever legal challenges are launched, it won't stop work on the pipeline expansion, unless a court grants an injunction.

“Without prejudging that, it's a pretty hard test, as a general rule," Olszynski told sister publication Business in Vancouver. “And I think, in this context, where we've already had one approval that was struck down, and we've had this additional consideration and consultation, I do think that we would expect that to be a relatively high hurdle at this point.”

The B.C. government plans to appeal to the Supreme Court of Canada a decision by the BC Court of Appeal that ruled the province doesn't have the constitutional authority to regulate what goes through a federally regulated pipeline.

"I think most of us expect that to go nowhere," Olszynski said.

Mike Hurley, mayor of Burnaby, where the pipeline terminates in a tank farm near the Westridge Marine Terminal on Burrard Inlet, told Reuters that his city was “absolutely against” the pipeline expansion.

“It brings too much extra risk into our community and we don’t believe the risk is worth the rewards. There’s risk of fire, explosion, chemical releases, a natural disaster for our First Nations people who use the inlet so much, and for business. We have been kept in the dark.”

Retired Supreme Court Justice Frank Iacobucci, who had been asked to oversee the re-initiated Phase III consultation process, said in his report that he is satisfied that the Crown has remedied the defects in consultation identified by the Federal Court of Appeal and that it has meaningfully consulted with potentially-affected Indigenous groups.

“At the end of the day, we listened and we are acting on what we heard,” said Trudeau. Measures in response to Indigenous concerns include co-developing a role for Indigenous groups in the project area in emergency preparedness and response to marine incidents, a seat at the table and better information in managing activities affecting the Salish Sea and project route, and increased efforts to protect the southern resident killer whale and its habitat, he said.

Through the consultation process, the Crown identified five general areas in which the project could have an impact on Aboriginal and treaty rights, Iacobucci said in his report. They include hunting, trapping and gathering rights; freshwater fishing rights; marine fishing and harvesting rights; other traditional and cultural practices; and Aboriginal title, resources and governance right and there were extensive discussions with Indigenous groups as to how those impacts might be mitigated through accommodation measures.

Trudeau said he wants both sustainable energy and a cleaner environment but “in order to bridge the gap between where we are and where we are going, we need money to pay for it.”

Canada is blessed with natural resources and with that comes major responsibility, he said. “As the world transitions to a cleaner economy, there will be demand for our existing resources and there are hundreds of thousands of good jobs that currently depend on that demand,” said Trudeau.

“The truth is, it doesn’t make economic or environmental sense to sell any resource at a discount. Instead, we should take advantage of what we have and invest the profits in what comes next — building a clean energy future that is already at our doorstep,” he said. “Fundamentally, this isn’t a choice between producing more conventional energy or less, it’s a choice about how we can sell it and how we get it there safely.”

The government, he said, strongly believes that having more options and more markets puts Canada in a stronger strategic position to create good middle class jobs and invest in a shared future.

“That is why we made today’s decision.”

Construction is expected to take 2-1/2 years, investment bank Tudor Pickering Holt & Co. said. Assuming work on the expansion resumes this year, the expanded pipeline could be in service in early 2022.

– with files from Reuters; as well as Nelson Bennett, Business in Vancouver 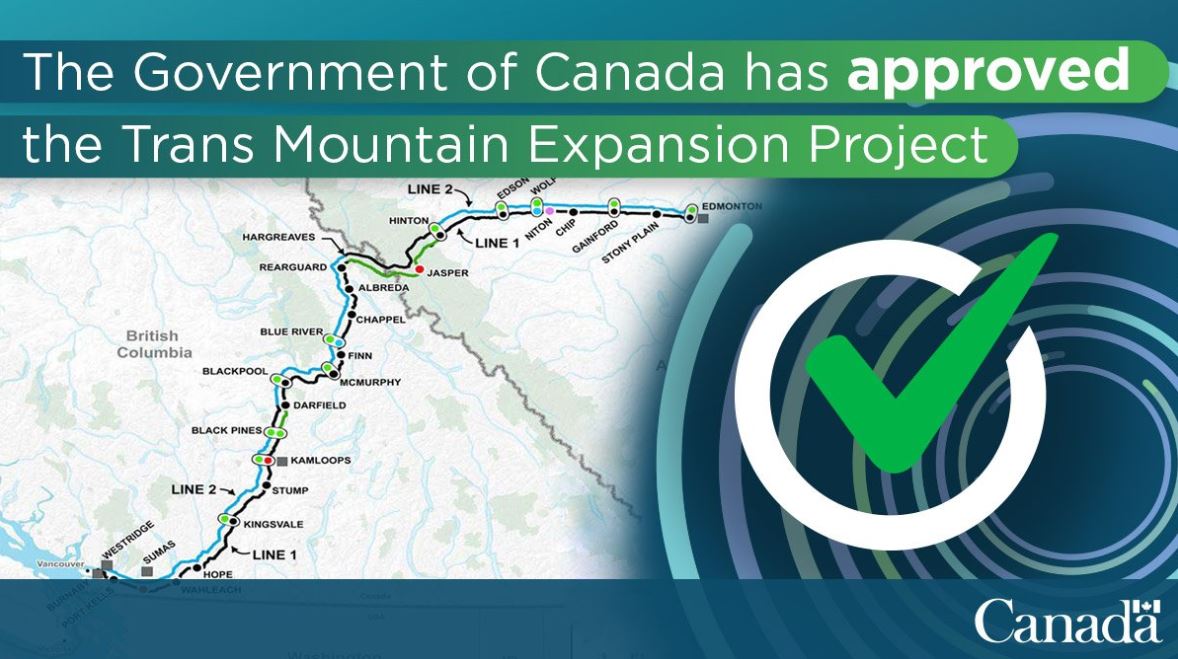