Energy Excellence Awards: The Best Of In Oilfield Services And Manufacturing Exporting Excellence

From April 15 to May 1, we will be sharing the best projects, technologies, and companies in these subcategories. Today, the best in oilfield services and manufacturing exporting excellence.

Citadel Drilling Ltd. had one good year of running room in western Canadian after its founding in 2013. Then oil price collapsed, leaving the company scrambling to find a return on investment on its new $25-million rigs.

“We still had good utilization rates, but the economics weren’t that good here. It was deflating to think, ‘Well, this is as good as it gets,’” says Dan Hoffarth, Citadel’s chief executive officer.

So in mid 2017, Citadel set its sights on the Texas Permian basin. A year later, 40 per cent of company revenues came from the U.S. By the end of 2019, Hoffarth expects that to be 90 per cent. Five of Citadel’s six-rig fleet are already in the Permian.

A lot of that export success comes down to Citadel’s modern super-spec rigs. Its technically advanced AC triples reduce downtime, labor costs and environmental impacts (for more on Citadel’s rig innovations, see the Advanced Technologies export story in which Citadel is also a finalist). 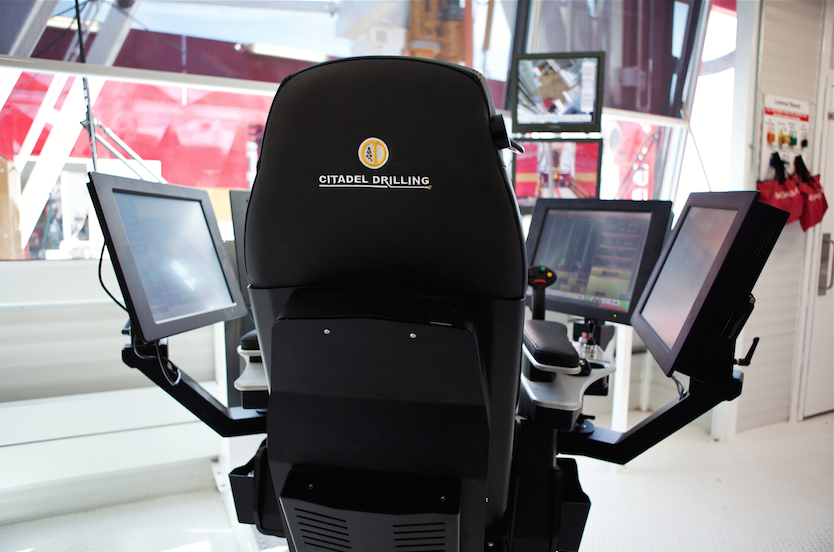 But equally important are the people who run these high spec rigs. Citadel’s drilling, safety and environmental performance is shaped by its culture of continual improvement, discipline and customer focus.

A door-opener to the U.S. market for Citadel was its work for Apache Canada Ltd. before it sold its Canadian assets to Paramount Resources Ltd. That track record helped Citadel secure work with its American parent operating in the Permian.

But apart from that, Citadel’s growth in the U.S. was the labour of determination and sales grunt work.

“Five hundred cold calls narrowed down to 10 call-backs. Then 500 more cold calls,” Hoffarth recalls. “We got really good at being able to discuss who we are openly and quickly, and what differentiates our company from the companies they were using.”

Once on site, having the best people on every rig went a long way to building a stellar U.S. reputation. Citadel was able to bring its Canadian employees to Texas. It secured NAFTA visas for them on account of the high-spec nature of its drilling rigs.

Initially Hoffarth wasn’t sure how a Texas patriot would take to a Canadian rig operated by Canadians, but it turned out to be an advantage in every way.

“Unemployment rates in West Texas are less than two per cent. Their view down there is that what is unemployed is unemployable. So you’d better make sure you have your labour scenario figured out,” Hoffarth says.

“When we hire Americans, we look to vets who have just been discharged from the military because they understand rank-and-file, which is what our rig employment structure looks like,” Hoffarth says. “These guys are generally fairly technical, they’re disciplined, so you get a 24-year-old with a wife and kid who sees this as a great opportunity.”

As for Citadel’s future growth plans, Hoffarth recognizes that, right now, the Permian is the “crown jewel” of the global oilpatch.

“Every other basin in North America pales to the Permian’s output. For our style of rigs, the basin could cut half its rigs and we would still be 100 per cent utilized,” he says. “So as a company, we’re now in the process of deciding what ‘next’ looks like for us.”

A lot of service companies chase activity hot spots across North America if they can, and Arnett & Burgess Oilfield Construction Ltd. isn’t immune to that type of thinking. But given the nature of pipeline construction and Arnett & Burgess’ 62-year history of carefully considered expansions in western Canada, the company wanted to be sure it could set down roots in the U.S. before making the move.

As a result, the company’s U.S. expansion was a decade in the making. It first looked at the North Dakota Bakken in 2009.  It incorporated in the state in 2015. And another six months it bought — not leased — a property in Watford City, ND, and set up its base in the heart of the U.S. Bakken.

“It was a contrarian move just as there was a mass exodus of U.S. capacity leaving the basin,” says Carey Arnett, president of Arnett & Burgess.

The company’s first U.S. pipeline project was in 2016. By 2018, it generated 26 per cent of its total revenues from the U.S. Not bad for a place that Americans consider a barren and inhospitable northern frontier.

“I’ll never forget the day I phoned a legal outfit further south in the U.S., asking for state registration in North Dakota. They go, ‘Say what? You want to go to North Dakota?’ It was like we going to Norman Wells,” Arnett recalls.

Three partnerships helped Arnett & Burgess’ expansion into the U.S.: guidance from its U.S. parent company; respectful and productive engagement with one of the local indigenous tribes; and the loyalty and support of its equipment suppliers.

“A really key strategic partner has been our tier-one partner with the Fort Berthold Reservation. That partnership enables us to work on reservation lands and we’ve been working with them on developing capacity,” Arnett says.

Despite being a stone’s throw from Canada, building pipelines in North Dakota isn’t the same as operating in Canada, Arnett says. Regulations differ, occupational health and safety rules differ, the general competency of the workforce differs, which jobs roles are considered trades differs—welding, for example, isn’t a trade in North Dakota — and attitudes towards wintertime construction differ.

“In Canada, winter is as good a time to build pipelines — often preferred so as not to annoy farmers,” Arnett says. “In North Dakota, they might get a permit in August but wait till May to start construction.”

U.S. pipeliners are concerned about the safety implications of working in the winter.

“But our safety record doesn’t track to seasonal variability because our risk mitigation was developed in a difficult [Canadian] operating environment and in a tight labour market,” she says.

For now, Arnett & Burgess is content with having established itself in North Dakota for the long haul. Arnett admits to feeling the gravitational pull of the Permian, which is challenged by pipeline takeaway capacity. But if Texas ever were to become an expansion option for Arnett & Burgess, it would probably be a long time in the making in order to get it right.

Sandtinel: Growing out of Permian foothold

Sandtinel sold its first sand separators into the United States in the second quarter of  2018. Eight months later, U.S. sales and rentals represented 25 per cent of its total revenues.

The Permian basin was the source of this rapid export growth and Sandtinel is now casting the net wider, to the Eagle Ford, the Bakken in North Dakota and the SCOOP/STACK of Oklahoma.

To fuel this expansion, “we’re essentially taking the cash flow that we generate and pumping it back into the business,” says Mark Quesada, Sandtinel’s program manager.

Sandtinel’s innovation in sand separation technology largely accounts for its rapid growth in the U.S. Circa 2015, Brent Rheaume, founder and chief executive of Rheaume Engineering, which owns Sandtinel, redesigned conventional sand separation with he aid of computational fluid dynamics, academic collaboration and a modest grant form the National Research Council (for more on the Sandtinel’s technology see the Export Advanced Technologies, where is it also a finalist).

Emerging from the depths of the downturn, Sanditinel set it sights on Permian because of the strong drilling activity, the proppant-intense wells in the basin and the shift to 100-mesh grade of proppant, which rendered legacy sand equipment “ineffective or even obsolete,” according to Quesada

“Our patented Vapor Lock Technology performs very well in that environment,” he says.

Sandtinel initially benefited from contacting the Canadian Trade Commissioners Office in Houston. It also worked with a consultant specializing in commercializing Canadian oilfield service technologies in the U.S. Then it attended an oil trade show in Texas and got some equipment into the field. Superior performance took over from there.

Sandtinel was also diligent in documenting its head-to-head field trials against competing products. This data was turned into reports that add firepower to Sandtinel’s marketing efforts.

Eventually Sandtinel noticed that it was mainly dealing with production flow-back specialty companies in the U.S., as opposed to dealing mainly with producers in Canada. This regional difference in how the U.S. industry is organized led Sandtinel to try a best-of-both-worlds approach.

“We now also get in front of U.S. E&Ps, who obviously have a vested interest in the equipment on their locations. So there’s a trickle-down effect on the flow-back companies, which in turn provides a boost to our business,” Quesada says.

Currently, Sandtinel is talking to trade commissioners in Australia and Argentina and setting the stage for selling its equipment offshore.

“We’re also in the process of rolling out a wider product line into the United States. There’s so much opportunity there that we haven’t even come close to tapping it out,” Quesada says.