From April 15 to May 1, we will be sharing the best projects, technologies, and companies in these subcategories. Today, the best in advanced technology exportiing excellence.

A good product sells itself.

For Sandtinel,which brings improved sand-separation technology to the market, it mostly is.

But even a good product needs business acumen to get it into the U.S. market, set up a Texas office, document its head-to-head field trials with competing products so that its salespeople have a compelling story to sell, and balance rapid growth with service and customer support.

Within six months of crossing the border, Sandtinel generated 25 per cent of its revenues from the U.S. In 2019, it expects exports to account for 48 per cent of total revenues, including from overseas markets 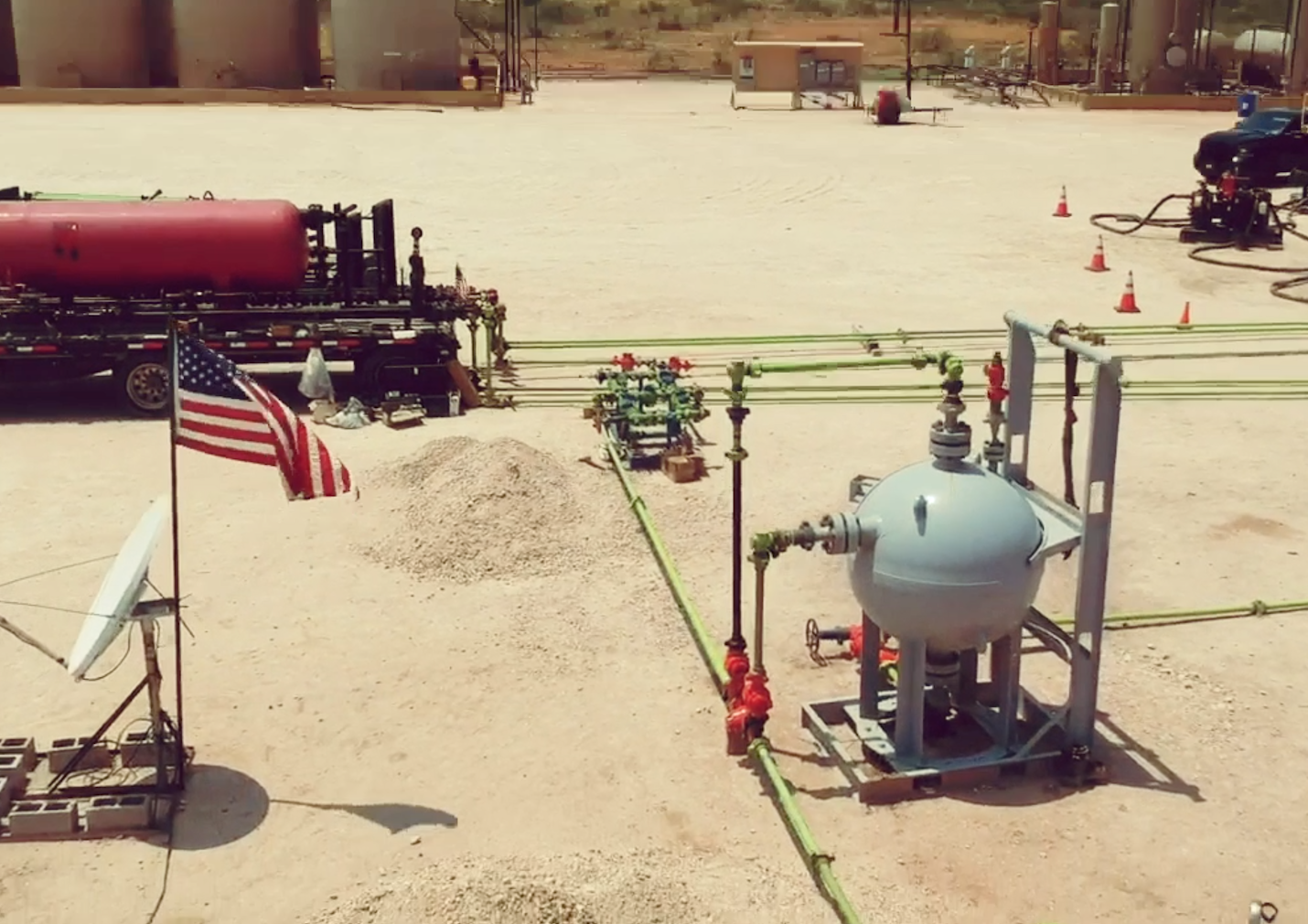 VL-TEK creates a vapor lock that temporarily forces a phase separation between the gas from the liquids in the incoming mixture. This approach doesn’t require filters and allows operators to remove sand in minutes during production without exposure to vapours. It also eliminates non-productive time, shut ins, and time spent raking out sand.

“In 2015, we developed the intellectual property, brought in computational fluid dynamics (CFD) expertise and reached out to academic partners and the National Research Council,” says Mark Quesada, Sandtinel’s program manager.

Sandtinel continues to improve its sand-separation technology. It has a bench-level model in Grande Prairie for product development. When Sandtinel engineers come up with ideas for tweaks in the CFD model, they 3D print components for the internals and include them as part of the model for validation in bench testing.

If the bench test confirms the improvement, they are sent to the fabricator for inclusion into the design.

“Most people think of this technology as being very basic and having nothing to it. But CFD is an area that isn’t really even covered a lot in engineering faculties. We’re modelling the flow of gases, liquids and particles, and we’re using 3D printing. That puts us in a position where we can rapidly prototype and then very quickly improve the product incrementally,” Quesada says.

Collaboration in the fabrication process adds another dimension to Sandtinel’s approach to innovation.

“It’s been a work in progress, to be able to integrate with our fabricator and have them suggest ideas for improvement or for saving money,” Quesada says.

Revenues are split 50/50 from sales and rentals in both Canada and the U.S. Its rental fleet has 100 per cent utilization and demand for Sandtinel’s products currently outstrips the company’s ability to deliver into the U.S., according to Quesada.

Over the course of three weeks, Todd Parker went from being Weatherford’s regional vice president for Canada, responsible for 4000 employees, to sitting at his kitchen table and writing up a business plan for a new technology on his daughter’s laptop.

What prompted Parker to give up the certainty of a good corporate position became Blue Spark’s WASP (Wireline Applied Stimulation Pulsing).

Traditionally remediates for this include matrix acidization, hydraulic fracturing, propellants or perforating. In contrast, WASP uses small amounts of electricity to stimulate or remove debris from oil wells.

By “small amounts” of electricity, a typical oil well in Alberta requires only the equivalent power input of leaving a lightbulb on for three or four hours.

WASP is run downhole on a regular wireline cable. It converts electricity to a shockwave in the fluid. These pressure pulses, of up to 10,000 psi, break up and mobilize brittle material that plug channels of flow within three feet of the wellbore and create “micro fractures” in the near wellbore rock.

Since testing the first prototype tools in 2011, Blue Spark has treated more than 500 wells. The results have been “encouraging,” Parker says understatedly. The average increase in production over those 500 wells has been 170 per cent in oil wells and 137 per cent in liquids-rich gas wells.

From the outset in 2013, when Blue Spark rolled out its first commercial tools, it targeted the global market.

“That was a painful decision at the time, but the right one,” Parker says.

Initial enthusiastic uptake of the technology flattened off in the depths of the oil and gas downturn. But since 2017, the company has seen exceptional growth. International sales account for more 90 per cent of Blue Spark’s total revenues. This is a complete inversion of the first two years, where domestic sales accounted for 90 per cent of revenues.

With only 15 people, Blue Spark avoids sinking capital in to bricks and mortar locations. It grows through partnerships and groups that provide service offering synergies.

“We form partnerships almost in every country we go to. Our deployment partners are boots-on-the-ground. Typically a technician deploys the service in each location,” Parker says.

Currently, Blue Spark’s biggest export market is the North Sea. Roots in this region go back to 2013 when Parker reasoned that if the technology was to work in the offshore market, it had to tackle the most demanding offshore market in the world.

“On these expensive offshore platforms, efficiency was that important proposition. The environmental component was also important,” he says.

Blue Spark had the good fortune to work with a customer that took it under its wing (Maersk Oil, bought by Total in 2018). Maersk saw both the potential in the technology and its shortcomings, and helped Blue Spark improve the product for the North Sea market.

“Through that collaboration, we refined our process and improved the technology. When you have a customer on your side, it becomes easier to find local partners,” Parker says. “That three-way partnership between our deployment partner, our customer and us work so well that some of our customers referred us to others in the North Sea.”

Dan Hoffarth, chief executive officer of Citadel Drilling Ltd., loves working in Canada. He started the company in 2013 to fill a perceived gap in the Canadian market for what he calls “super-spec rigs” — technically advanced AC triples that reduce downtime, labor costs and environmental impacts.

But by the end of 2019, Hoffarth expects 90 per cent of Citadel’s revenues will come from the U.S. It already has five of its six-rig fleet in the Texas Permian basin.

“It’s been a tough run in Canada. It started off as a necessary requirement to export our services to the U.S., but it ended up as a really nice place for us to operate as well,” he says.

This admission reciprocates the good will that Citadel encountered in the United States. In the U.S., three-mile extended-reach horizontals in the Permian are a perfect fit for Citadel’s modern fleet of capable rigs (for more on Citadel’s business, see the Export Excellence/Oilfield Service and Manufacturing story, where it is also a finalist).

Here’s the combination of features that keeps Citadel busy in the U.S.: a 7500 psi circulating system, extremely large capacity high-pressure and high-volume pumps, top drive, significant racking capacity to keep all of the pipe on the derrick, a moving system for logistical efficiency, a high-spec mud circulating system with an updated and robust ability to handle different circulating fluids (invert base, saltwater base, freshwater base).

“And it has be AC so that it is fully controllable, highly programmable, and allows that program to be adapted and updated to the operators needs,” Hoffarth says.

Big drilling companies have these rigs too, but they also have big-company momentum, an established production line and potential commitments to specific types of equipment.

“We’re a small service provider inside a very large service provider niche. The barrier of entry to this market is extremely high. You’re talking roughly $25 million per rig. It’s not for the faint of heart. It’s a big undertaking and you want to make sure you get it right,” Hoffarth says.

In building these rigs, Citadel draws on the expertise of own people who invariably spent a long time in the industry.

“We understand why this equipment needed to evolve,” Hoffarth says. “We developed a lot of our own technology in-house. The technology we didn’t develop ourselves, or didn’t need to develop ourselves, we were able to identify as top-of-market already. Why spend time reinventing the wheel?”

Citadel rigs also deliver the highest level of environmental stewardship in the market. By carrying spill containment and their own vacuums, oil is kept from contaminating the ground. Running a blended natural gas and diesel ratio of 70/30 cuts carbon dioxide and particulate emissions, while cutting costs and improving safety through reduced diesel deliveries by road.

“Our employees and executive are the hunters and fishermen and outdoorsmen who enjoy being outdoors, so this also makes sense to us,” Hoffarth says.