From April 15 to May 1, we will be sharing the best projects, technologies, and companies in these subcategories. Today, the best in innovation and research in production technologies.

Some of the greatest innovation gets done in an industry downturn. Activity slows, companies have time to be more methodical and creative, and though funding for research and technology adoption may be difficult to come by, companies are driven by necessity to find ways to trim costs and create new revenue streams throughout the production process.

Two companies that are leaders in production technology advancement in difficult times took very different routes to get there — and to earn Energy Excellence Award recognition for new production technologies. One company took an entirely fresh approach to casing gas compression to win over new customers, while another essentially went back to the drawing board to squeeze greater efficiencies out of drilling and fracking operations systems wide.

A downturn in natural gas prices and a chance conversation with a customer set a new course for a service company that saw its fate as “innovate or die” — an enterprising change of course that made Compact Compression Inc. (CCI) a finalist for Innovation & Research Excellence in Production.

CCI had built hundreds of portable gas compression trailers for the gas well boosting market in order to produce the last remaining gas from end-of-life wells. Virtually overnight, that market disappeared in 2009 when natural gas prices sharply declined, and have yet to recover.

Fortunately, oil prices have not experienced nearly the same sustained level of price declines as gas and CCI decided to target the oil production market. Sparked by a conversation with a customer who asked if CCI could build casing gas compressors similar to what other suppliers were providing, the company conceptualized, engineered and developed in-house its hydraulic casing gas compressor (HCG). Key to its success was to take a clean-sheet approach to the challenge in directly addressing its customers’ needs.

The challenge was to reduce gas pressure in the casing annulus to increase oil production from wells. Increased regulation for methane emissions has curtailed the practice of venting the casing annulus to atmosphere. Over the years, several technologies have been adapted to compress the casing gas into the production flowline, but the theory behind those solutions rarely stood up in practice, with inconsistent performance, poor capacity control, frequent breakdowns and high maintenance costs.

CCI’s solution was to apply both new technology and a new business model to the problem. Firstly, it created a fit-for-purpose, simple and reliable, electric-over-hydraulic reciprocating compressor easily configurable for a wide range of pressures and volumes. For sites with no available power, a natural gas engine-over-hydraulic option was developed. 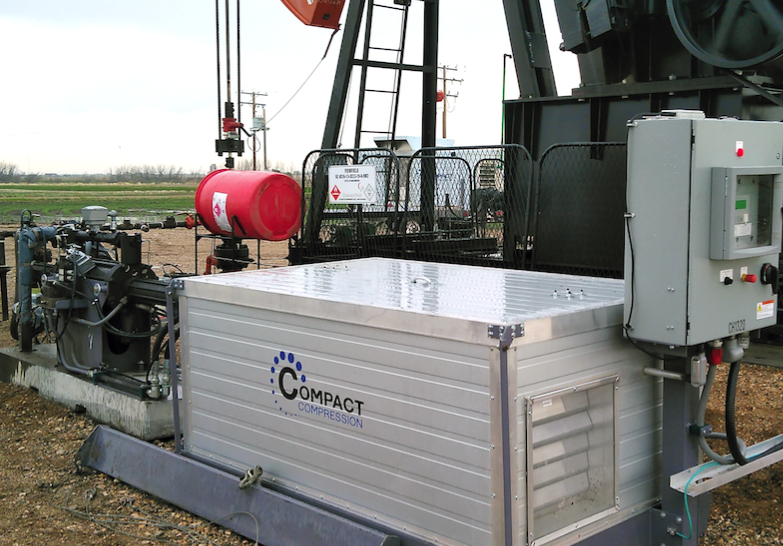 The HCG excels in boosting oil production from wells in low-pressure reservoirs with moderate to high gas-oil ratio, oil cut and inflow. By relieving the gas pressure from the annulus, liquid level in the well rises and the downhole pumping rate can be increased to produce more liquid from the well. The HCG does this reliably with over 99 per cent uptime, the company said.

Secondly, CCI developed a no-hassle, all-inclusive, fixed-rate service plan that provides cost savings and cost certainty for the ongoing maintenance of the equipment. When considering a population of casing gas compressors, the annual cost of the fixed-rate plan is significantly less than annual maintenance cost for other types of casing gas compressors, said CCI, as a direct result of the fit-for-purpose design and the company’s use of Internet of Things (IoT)-enabled predictive analytics, rather than a fixed interval schedule, that enables demand-based service.

The all-inclusive aspect of the fixed-rate service plan strongly drives CCI, in partnership with its customers, to make continuous improvements to the equipment and field processes to increase reliability and uptime, the company noted. Under the plan, CCI technicians take care of all equipment repair, maintenance, parts and travel, no matter the cause.

Upgrades that enhance reliability are implemented at no additional cost to the customer, recognizing that these improvements drive servicing costs down. With increased reliability and IoT-enabled predictive maintenance, trips to the wellsite to service the equipment are reduced by at least 50 per cent, CCI said.

Results include less operator intervention required and more uptime than other systems, lower cost of ownership, reduced methane emissions and increased oil production. The HCG product line has generated enough revenue and profitability to sustain a staff of 35 employees in manufacturing, field service, engineering and administration, while CCI has managed to capture a significant portion of the Canadian casing gas compression market in a short amount of time.

Finalist Birchcliff Energy Ltd. is among the companies in the forefront of the fracking revolution’s learning process, with the establishment of a Technical Science Pad, or “Tech Pad,” in the Montney that has produced several unconventional production advancements.

Unconventional reservoirs represent a different kettle of fish than conventional plays. They are challenged by the nature of their multilayered reservoirs, the complexity of aspects such as changes in fluid behavior, and vertical and aerial heterogeneities, and the uncertainties in geometries of the created hydraulic fractures.

“Reservoir modelling of unconventional plays, particularly multi-layered reservoirs, has been challenging for us at Birchcliff Energy and for the industry in general. There is complex interplay between natural and man-made phenomena. We set out to collect a dataset that would give us clearer insights into our most impactful challenges,” said Theo van der Werken, asset manager — Pouce Coupe.

The Tech Pad involved the drilling of one vertical and four horizontal wells in three different intervals. Birchcliff acquired 313 metres of core, high-resolution vertical logs, and tilt meter and micro seismic data from the vertical well. The horizontal wells provided a wealth of information from high-resolution well logs, tracers, geochemical fluid and rock sampling and significant production flow, build up and interference testing. A permanent fibre optic cable installed in one of the horizontal wells allows Birchcliff to observe how wells interact in the subsurface over time.

Among other findings were that a completions design with an optimized number of clusters per stage would effectively keep clusters open and deliver proppant, resulting in improved well stimulation and production, and that the plug and perf design tends to generate higher complexity near wellbore compared to openhole, which creates more of a bi-wing geometry. The higher complexity appeared to increase condensate gas ratio recovery and minimize parent frac hits.

The results also help Birchcliff to understand the effects of depletion and stress-shadowing in multilayer reservoirs and well-spacing by zone and between zones. An enhanced fracture/completion design based on those learnings was the result.

Birchcliff now has horizontal production out of four distinct intervals in its Pouce Coupe area without degradation of well performance, showing that the team was able to de-risk and add significant value to its asset base by co-development of multiple layers at the same time.

Collaboration in the project included working with several university consortia both with the University of Calgary and the University of Alberta that are using the science and Tech Pad data sets in collaborative research and development programs that support graduate and post-doc students. Birchcliff also collaborated with the provincial and federal governments as the project qualifies under tax incentive programs and actively engages with other Montney operators with ongoing knowledge sharing sessions and data swaps to further leverage the rich data set.

“Designing and executing our tech pad experiments was a highly collaborative exercise; internally at Birchcliff, with university consortiums, with multiple levels of government, with our peers. The problems we’re trying to understand are complex and multidisciplinary. I’d say that in addition to the specific technical learnings we achieved, we’ve learned that broad and effective collaboration is key to innovating in this space with confidence,” said van der Werken.