Energy Excellence Awards: The Best Of Innovation And Research In Power, Transmission & Storage

From April 15 to May 1, we will be sharing the best projects, technologies, and companies in these subcategories. Today, the best of innovation and research in power, transmission & storage.

Canada’s innovation ecosystem is about more than just solving challenges facing oil and gas producers. New technologies to improve downstream industries like power generation, transmission and storage are also being created and tested as the global energy market electrifies. The technologies selected as finalists in this category could influence the power sector well beyond Canada’s borders.

Few places on the planet are as conducive to producing electricity from wind as southern Alberta. The wind races down the eastern slopes of the Rocky Mountains and across the bald-ass prairie come spring, summer, fall, or winter.

But there’s a problem when temperatures drop below freezing. Wind turbine blades collect ice, which decreases turbine efficiencies and that robs wind producers of revenue. In Canada alone about $250 million per year is lost to icing. And since cold climates are ideal for wind energy production, that figure climbs an estimated $3 billion of lost annual revenue worldwide.

Kitchener, Ont.-based Borealis Wind tackles this challenge with a retrofit blade de-icing solution that, in 2018, won a $25,000 top award at the University of Calgary’s Hunter Hub for Entrepreneurial Thinking in Calgary event.

“Our advantage is that we can install the entire retrofit up tower,” says Jonathan Parkin, manufacturing and mechanical design, Borealis Wind.

Existing de-icing systems on the market require taking down the blades from the tower, which incurs hundreds of thousands of dollars of crane work. Up-tower installs are a significant advantage.

Borealis Wind’s De-icing System consists of a heating system installed inside the leading edge of the blades. It removes ice and remains protected from the harsh winter environment. Reducing ice build-up on the blades not only improves power generation efficiencies but also the reliability and safety of the equipment.

“Now that we’ve finished our first full winter of successful pilot testing, we are looking at commercialization of the system. This year and 2020 will be focused on scaling the system to different turbine models and increasing our sales,” Parkin says.

The payout for Borealis’ de-icing retrofit is about five to seven years. The average life of a wind farm is 25 years, so the return on investment makes sense.

Parkin estimates that less than 15 per cent of wind turbines in cold climates have technology installed to recover power losses due to icing. Some OEM wind turbines offer de-icing as an option but, surprisingly, Borealis has customers who declined an OEM de-icing system either because they underestimated the icing problem or couldn’t raise the additional capital to purchase the turbines with de-icing.

“Retrofit de-icing solutions range from spraying down blades with hot water from helicopters to blade-mounted technologies, and special coatings,” Parkin says. “Our solution is more effective than some and less effective than others but, for our price point, we are the most effective solution.”

A global network of supply chain partners supports the components needed inside the blades. These technologies come from Canada, the U.S. and Europe.

“We also have several funding partners, provincial, federal and from customers. Customer collaboration — onsite managerial and technical teams to manage the systems — were critical,” Parkin says.

As Borealis Wind starts working on commercial installations around the world, it takes on a new challenge — that of transitioning from a small group of technology developers to being a revenue-generating company.

“This will require flexibility from our group,” Parkin says.

E3 Metals Corp. has delineated an inferred resource estimate of 6.7 million tonnes of lithium carbonate equivalent from brine in the Leduc Reservoir, ranking Alberta as one of the largest lithium resources in the world.

If E3 Metals is successful in commercializing its proprietary technology for a critical step in lithium production, it could spur a new industry in the province. 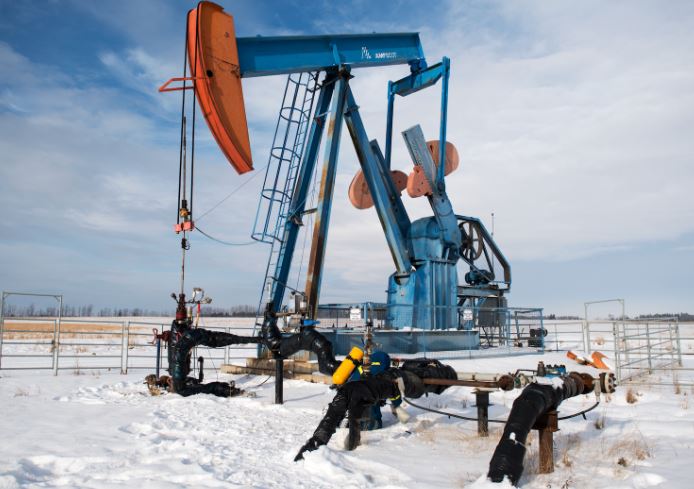 While everyone knows that lithium-ion batteries and electric vehicles are to alternative energy what peas and corn are to a Sunday school picnic, here are some numbers to consider.

According to Transparency Market Research, the lithium-ion battery market will potentially be worth US$77.4 billion by 2024, driven mostly by electric vehicles, although lithium is also widely used in ceramics and glass manufacturing, electrical applications and electronics, and lubricating greases.

“What we are working on is one piece of an overall process for lithium production,” says Chris Doornbos, E3 Metals' president and chief executive officer.

In simple terms, the overall process has three steps:

To concentrate brine, E3 developed a unique polymer resin chemical that is highly selective for lithium. Research on this started in 2017 with the help of the University of Alberta, funded partially through the National Science and Engineering Research Centre. The university continues to be involved, providing technical oversight, direction and scientific/advisory services.

Alberta Innovates awarded E3 Metals $100,000 towards the completion of E3’s Lithium Extraction Project and maintains an active role providing mentorship and support to the company.

“We’re going to be testing our process in a lab scenario in the next several months. We assume it’s going to be successful and then we can start designing a pilot plant for it,” Doornbos says.

If successful, the pilot plant will produce a concentrate that will be shipped to an established lithium processor.

Since its founding in 2015, E3 Metals has covered a lot of ground: it went public in 2017, identified one of the largest lithium resources in the world, developed a promising technology that previously didn’t exist and achieved key milestones with good capital efficiency. But piloting and that final commercial step has toppled many promising ideas in Alberta.

Nonetheless Doornbos expects to start piloting the technology at the end of 2019 or early 2020, with a target for production is 2022, at an initial output of about 10,000 tonnes per year.

“Then we’re looking at scaling up to 50,000 tonnes, which is just almost a $1 billion business in process revenues,” Doornbos says. “So this can be a big business for Alberta — and that’s just one project.

We can do multiple projects. Plus, there’s opportunities for this to grow into a bigger industry as other companies tie into the business. It’s going to have a huge impact on Alberta’s GDP.”