Energy Excellence Awards: The Best In Operational Excellence In Pipelines And Facilities

From April 15 to May 1, we will be sharing the best projects, technologies, and companies in these subcategories. Today, the best of operational excellence in pipelines and facilities.

Pipelines are a battlefront of choice for those who feel the need to wage war on an industry that has fueled every dimension of modern life and will continue to do so for the foreseeable future. The resulting construction delays and pipeline cancellations have damaged Canadian interests at a time of unprecedented technology advancement in pipeline safety and performance.

Case in point: Hifi Engineering Inc.’s high fidelity dynamic sensing (HDS) is a fibreoptic technology that surpasses conventional leak detection in acuity and the ability to pinpoint a leak.

“We can tell you exactly where an incident occurred in real time in very high fidelity. We can detect extremely low-level leaks by sensing the acoustics and vibration associated with the leak in a way that flow metres can’t,” says Steven Koles, Hifi’s president and chief executive officer. 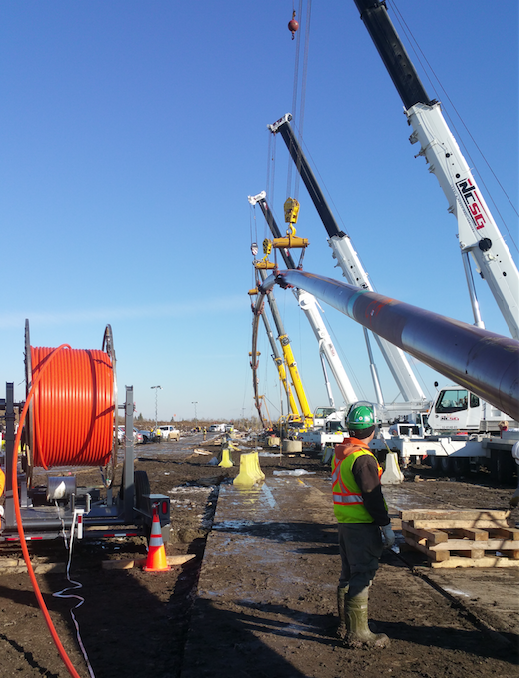 The work with BHGE was instrumental in getting the large amount of data required for this technology to a control room in real time. The result is a cloud-based control room interface that runs on a Google browser.

“We worked with TransCanada on two methods of retrofitting existing pipelines. One was intelligent micro trenching of the cable in a conduit close to the pipeline. The other is putting the fiber-optic sensor in a stainless-steel capillary that goes inside the pipeline. This collaboration allowed us to do something that would have been be impossible to do otherwise,” Koles says.

Today, Hifi’s HDS is backed by more than 50 patents. It has over 400,000 metres of deployed HDS fibreoptic lines with Enbridge, TransCanada, Husky Energy Inc., ExxonMobil Corporation, various midstream clients and on the Trans Mountain Pipeline, now owned by the federal government.

“We have long installations on very large transmission pipelines but also short installs on smaller pipelines in high consequence areas—river crossings of one to five kilometres,” Koles says.

Apart from deployment in the energy sector, HDS’ versatility has found applications in Brazil for a mining company on a slurry pipeline and, in Europe, on a potable water pipeline project to remedy a 30-per-cent volume loss to leaks.

Pipeline companies today are telling the public that their pipelines “are safer than ever,” but this can fall on deaf ears in a sea of marketing messages. Going a step further to explain how pipelines are employing new technology such as HDS can lead to understanding and trust.

Koles recalls a town hall meeting in Saskatchewan along a right of way for a proposed Husky pipeline. He was invited to present Hifi’s technology by teleconference.

“I think it made a difference, showing the people in the town hall meeting what technologies are available and what is being used to make this pipeline safe,’ Koles says. “Through the video connection, I could actually see the farmers with their coffees and John Deere hats at the back of the room sort of nodding, Yeah, I get it. This makes sense.’”

Canadian Natural Resources Limited’s Area Based Reclamation pilot project was so successful that the Alberta Energy Regulator (AER), in collaboration with industry, expanded the idea across the entire province (for more on AER’s Area Based Closure program, see Operational Excellence/ Industry Accelerators).

Canadian Natural’s pilot (one of three such pilots run concurrently at the time) proved that a coordinated company-wide asset approach to land reclamation lowers costs and improves results.

“What made a difference was working with the regulator and the landholders and being able to group reclamation projects logically,” says Joy Romero, Canadian Natural’s vice-president of technology and innovation.

Canadian Natural’s shift to Area Based Reclamations promises to further accelerate this record of success.

Although the program references “reclamation,” it actually includes a broad set of activities: remediation (the removal of old infrastructure and soil clean-up); abandonment and discontinuation (suspension and capping of wells and pipelines in a safe and environmentally sound manner); and reclamation (returning the sites to forests, agriculture, wetlands, or recreational and municipal land).

Canadian Natural supports reclamation research through practical hands-on field trials and involvement with industry, academic and government researchers. The expansion of Area Based Reclamation to a provincial-wide strategy marks a shift from competitive to collaborative thinking about closure.

But Romero notes that Canadian Natural and other oil and gas producers in the province have a long history of sharing insights and best practices through Canada’s Oil Sands Innovation Alliance (COSIA) and the Petroleum Technology Alliance of Canada (PTAC).

Area Based Reclamation is supported by Canadian Natural’s continued participation in ongoing industry research and technology programs to learn more about the diverse ecosystems in which it works and how to best manage reclamation in each region.

In 2016 and 2017, for example, it worked with industry and regulators through PTAC to reduce excavation and disposal on native prairie, protect biodiversity and accelerate reclamation.

Canadian Natural’s partnerships that ensure continued leadership in land reclamation also extend to its long-standing corporate membership in the Canadian Land Reclamation Association (CLRA)—a non-profit organization that encourages personal and corporate involvement where reclamation or rehabilitation of disturbed lands is planned or implemented.

The project’s goal is to provide a sustainable water supply for one of Canada’s largest oil and gas plays, the Duvernay, while eliminating 12 million m3/year of freshwater consumption and reducing GHG emissions by over 70,000 tonnes CO2e/year.

The project proposes to create a centralized treated wastewater re-use system near Fox Creek. This will provide shared, high-utilization, water infrastructure for oil and gas development, while reducing the environmental footprint and costs associated with water management.

“The economics of water are much stronger when you put in permanent infrastructure. The investment pays off very fast,” says Stuart Torr, president, Integrated Sustainability, a provider of collaborative turn-key solutions for water, waste and energy.

Torr’s team started talking to its energy clients about sharing infrastructure in the Duvernay, a region that has limited freshwater resources. This led to conversations that redefined wastewater as an asset rather than a liability.

The WhiteFox Project proposes to ship treated final effluent (TFE) from the ANC facility in Whitecourt by pipeline to multiple distribution points near Fox Creek for use in drilling and completions operations.

Torr says the project has the backing of the towns of Fox Creek and Whitecourt, the municipality of Greenview and local First Nations.

It has also spurred significant regulatory collaboration between Alberta Environment and Parks (AEP) and Alberta Energy Regulator (AER) and is recognized as a “sustainability-focused capital project,” attracting environmentally focused institutional equity to Alberta.

“It’s staggering, the difference in the conversations when talking to people about this project because it makes such great sense to everyone,” Torr says.

The 12 million cubes of water per year the WhiteFox Pipeline proposes to supply, however, won’t be enough for full Duvernay oil and gas development. One drilling rig operating in the Duvernay needs about a million cubes per year, so Torr prefers to think about the project as a water “insurance policy” for producers — one that provides environmental and social benefits.

Currently the project is concluding Aboriginal consultations, and regulatory approvals with the AEP are in their final stages. As a first of its kind, it’s a more complicated and slower regulatory progress that involves both the AEP and the AER.

In March, the WhiteFox Pipeline project was awarded $10 million by Emissions Reduction Alberta.

At the same time, however, the last six months have also brought uncertainty, as producers reconsider their capital budgets amidst the challenging economic conditions.