From April 15 to May 1, we will be sharing the best projects, technologies, and companies in these subcategories. Today, the best in oil and gas operational excellence.

The future of Canada’s oil and gas industry lies in being low-cost, low emissions hydrocarbon producers. The Energy Excellence Awards finalists for operational excellence in oil and gas are focused on working together to integrate new technologies into operations meet these future demands.

Ambyint’s success in well optimization is built on the industry’s largest repository of high-resolution well data, totalling nearly 100 million operating hours since the company started in 2004.

By combining big data, A.I. (expert systems, machine learning and neural networks) and advanced proprietary physics models, Ambyint helps producers cut operating costs by as much as 20 per cent while increasing production by about 10 per cent.

Income trusts back in the day would have loved this technology, but there’s plenty of potential uptake for Ambyint’s optimization solution in today’s oilpatch because most wells in older oilfields don’t get optimized. Operators typically manage to optimize only a quarter of their wells, according to Alex MacGregor, channel partner manager.

“Husky Energy [Inc.] is an early adopter of our technology and is a key company that has seen the value in adopted our system,” says MacGregor.

Over a three-month 60-well pilot test of Ambyint’s optimization solution at Husky’s Rainbow Lake field, the producer wanted to reduce operating costs and improve uptime of the wells. Its wells averaged 40 bbls/d of oil from 450 bbl/d of total fluid production. The test included a mix of older wells driven by electric motors and newer wells with pump-off control (POC) and variable frequency drives (VFDs).

The pilot results included $900,000 of (extrapolated) annual savings and a significant reduction in operating expenditures. Husky also achieved a two-month payback on its Ambyint’s investment. That success led full-field deployment.

“A lot of the workflows in older oilfields are heavily dependent on an operator visiting the well, recording measurements each day and there’s not much insights into what’s going on with these wells,” MacGregor says.

Ambyint’s equipment installation is efficient. MacGregor says its Internet of Things-enabled high-resolution controllers went in on an initial 10 wells in 30 minutes (later expanded to 60 wells with similar efficiency). No additional infrastructure systems were required.

“A lot of rod-pumping systems tend to either run too quickly or to slowly. If your well is walking, it’s under-pumping. If it’s sprinting, it’s over-pumping. So one of the things that our system does is classify the well’s behaviour using a machine learning algorithm,” MacGregor says.

“Along with that well classification piece, the system also makes recommendations on setpoints to change the speed of the well to optimize it,” MacGregor says.

At the start of the pilot, set point recommendations are typically reviewed by an engineer. As a pilot progresses most engineers and operations staff will transition to a point where set point changes are accepted automatically as they build trust in the system. From this point forward, most the wells are run autonomously.

“We’re also working through applications for Energy Efficiency Alberta, which has a program for retrofit technologies that reduce greenhouse gases,” MacGregor says. “We can benefit from that because we reduce an oil company’s electricity bills.” 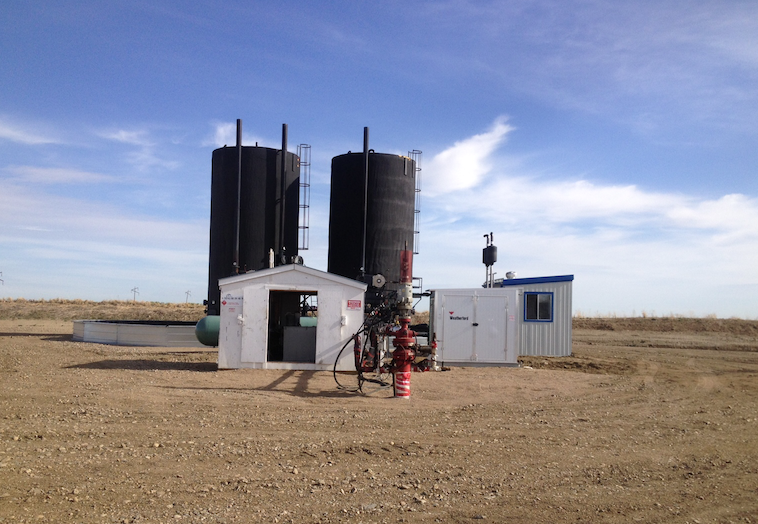 Between 2013 and 2017, Canadian Natural has reduced vented volumes at its Alberta heavy oil operations by 71 per cent.

“That’s a culmination of projects and some of it is good old efficiency and effective management of the thousand compressors, proactive tie-ins into well pads and continuous improvements,” says Joy Romero, vice president technology and innovation, Canadian Natural Resources Limited.

Reducing methane emissions is one of the most cost-effective ways to decrease GHG emissions. In upstream oil and gas, methane emissions are primarily from venting (controlled release of gases) and pneumatic devices (that control natural gas pressure/flow).

Recent technology innovations include vapour compressor technologies and, for methane that can’t be captured effectively, reduced temperature combustion equipment that allows the conversion of methane to carbon dioxide near the wellhead.

“Collaboration is important because, as an industry, we can accelerate the development of these technologies for implementation when we share the results, costs and best practices of these projects. We can absolutely accelerate both commercialization and adoption by working together,” she says.

PTAC’s research into finding more effective systems and technologies for quantifying fugitive emissions in conventional and oilsands operations is an example (see Operational Excellence/Industry Accelerators, where PTAC is a finalist) while various other initiatives for reducing emissions are in different stages of development.

“Reducing greenhouse gases for us is obviously the right thing to do, but people may not understand that it is also the right business thing to do,” Romero says. “By reducing methane emissions, we have more product to sell.”

This alignment between environmental stewardship and good business practices is central to Canadian Natural’s industry collaboration and its corporate culture of innovation.

“Safety, the environment and innovation are the accountability of each and every employee. Cultivating that culture is germane to our company,” Romero says.

But that culture of personal accountability for innovation can meet with challenges as a company grows to the size of Canadian Natural.

“We’ve grown a lot and are now 10,000 strong. That accountability for each and every employee still exists but it needs some systems in place to help ensure ideas are shared across the organization in a timely manner,” Romero says.

To this end, Romero’s team works with all Canadian Natural business units to help accelerate innovation and ensure that advances are shared with other business units and reported up to the most senior people inside the company, including the board of directors.

“We make sure that each project is evaluated the same way. We develop timelines for each department so as to focus capital for the best effect. We develop deployment plans for the successful technologies and try to de-risk and accelerate all the technology options,” Romero says.

A business leader with a progressive vision can either try to bend an existing company to his strategy or build a new company with people who share those ideals.

Seven years ago, Chris Slubicki chose the latter option when he founded Modern Resources Inc. Since then, the private equity-backed company has demonstrated solid growth, been recognized by an industry EPAC (Explorers and Producers Association of Canada) Award and lived up to its name.

“We have a modern asset base, modern technology, modern ethics and modern environmental standards,” says Slubicki, the chief executive officer of Modern Resources. “We did, however, inherit old-school technology and thought there must be a better way to do things.”

Solar panels, which have been standard equipment for remote SCADA and communications equipment for 20-plus years, provide the primary power. Methanol-powered fuel cells are the back-up. Methanol fuel cells reduce maintenance requirements and operating costs, while producing only a minute amount of CO2 and fresh water.

To make its emission reductions as economic as possible, Modern also started a carbon credit program.

“In setting that up, we worked with a couple advisors and consultants,” Slubicki says.

Modern West Advisory Inc. guided the process of applying for carbon credits. For measurement of methane emissions, which was key to setting up the program, it turned to Green Path Energy Ltd.

Modern Resources didn’t develop MULE sites from the outset of its operations. It was an evolution. About half of the company’s sites are currently MULE.

“So are we perfect? No, but all of our future sites are MULE,” Slubicki says. “We reduced emissions. We get carbon credits. It’s resulted in a lot of corporate pride. But we’re not resting on her laurels. We’re looking for other things we can do.”