The Energy Excellence Awards Announces Its Inaugural List Of Nominees!

Highlighting success across the energy sector, nominations for the inaugural Energy Excellence Awards draw from all areas of the industry (including power and cleantech) and showcase champions of collaboration, supply chain sophistication, advancements in innovation and research, as well as project management, operational and exporting excellence.

We congratulate the over 90 nominees from across Canada’s energy industry, who through their ongoing work, display excellence in all three awards categories, and within all 13 specialty subcategories.​ We also thank and acknowledge the work of our diverse industry advisory board, which has assisted us in the process.

“The awards are presented by the Daily Oil Bulletin (DOB), which has served the oil and gas industry for over 80 years,” says Bemal Mehta, senior vice-president of Energy Intelligence at JWN, which publishes the DOB. “We’ve provided energy industry data and intelligence and industry leadership over that period. We’ve also told the story of the industry’s positive accomplishments — but we recognize we could do an even better job of celebrating industry’s successes.”

Mehta says the Energy Excellence Awards comes at an ideal time, given the struggles Canada’s fossil fuel sector faces with “challenging commodity prices and unfair treatment” from governments and other sectors of Canadian society.

The energy sector continues to dominate Canada’s economy, accounting for 276,000 direct jobs in 2017, supported by an additional 624,000 jobs according to Natural Resources Canada. Energy is responsible for 11 per cent of Canada’s gross domestic product, and generates government revenues averaging almost $16 billion a year.

“The industry has been very good at [highlighting] data and facts [about its players] but not very good at being a storyteller. The stories of Canada’s energy sector leaders need to be told. Through the awards, we want to tell these stories to people within the industry, but also to those outside the industry,” Mehta says.

Starting at the end of March, the DOB will tell these stories in the Best of Nominees editorial series. Through an industry peer judging process, the top three-to-four nominees in each sub-category will be featured, sharing their exceptional stories of excellence.

The Energy Excellence Awards Reception will be held at Calgary’s Devonian Gardens on May 2, followed by an editorial series highlighting winners and the publishing of the Excellence Insights Report – featuring all nominees. For more information on the Awards program visit the website.

Once again, congratulations to the over 90 nominees below. We wish them luck as the judging begins and as the awards program continues. 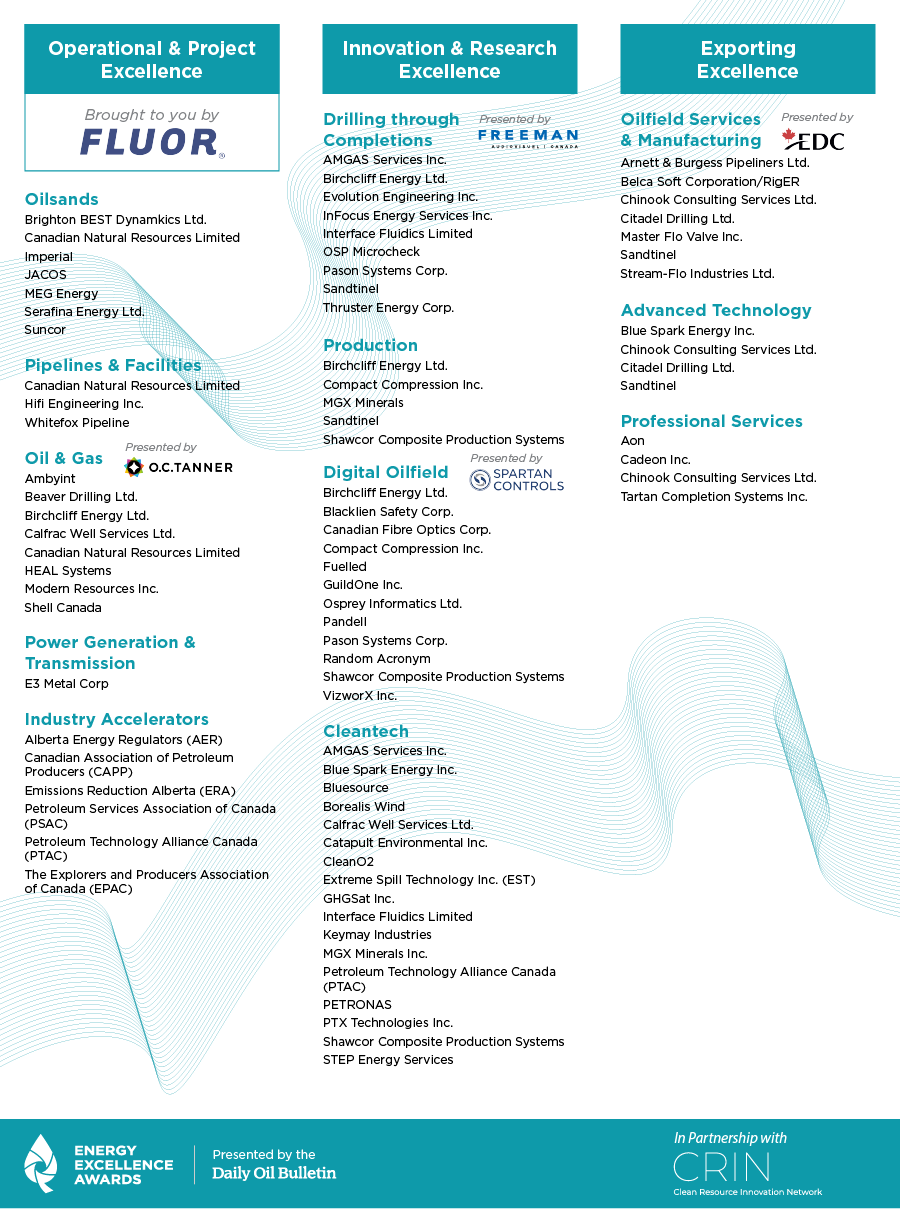