Energy Supply And The Future Of The Oil And Gas Industry

Last month, I talked about world energy supply and demand over the next few decades, and pointed out that all credible energy forecasts show humanity using more and more energy every year — and that fossil fuels will continue to dominate energy supply at least into the 2040’s (click here to review that article).

Worldwide, coal demand may decline, oil demand will eventually level off, and natural gas demand will continue to grow. If this is true, then clearly the oil and gas industry will stay busy for the next 30 or more years meeting society’s demands.

But will fossil fuel demand really continue to grow? Many nations have met at high-profile summits — like Kyoto and Paris — leaving with agreements to reduce their production of carbon dioxide and other greenhouse gases. Apparently rigorous targets have been set, although when the time for real action comes, questions begin to arise: How much reduction is required to meet a certain temperature goal? Do we get credit for natural sinks like forests? How important is methane, and do we count bovine flatulence and other “natural” methane sources alongside natural gas leaks?

I concluded last month with Blair King’s (“A Chemist in Langley”) observation that hoping to make drastic cuts in fossil fuel use in the next 10 years is “magical thinking.” Recently, Derek Burney (Canada’s ambassador to the United States from 1989 to 1993) commented:

“It is not a question of climate change denial. Rather, it is an acknowledgement of what works and what does not work. That reality check is coming home to roost as politicians grapple with explanations of policies that voters will endorse, as opposed to cost-free sentiments that can be more universally endorsed.”

There’s the key. People in the developed world (OECD countries) — and particularly in North America — are great at expressing cost-free sentiments. Many people have no problem with speaking out against Big Oil, Big Pipeline, Big Government, or other perceived offenders — it costs them nothing. They seem to think that by speaking out and protesting that they are accomplishing something positive. But what are these same people doing themselves?

It is obvious that society’s total energy demand is simply the sum of the energy demands of individuals. If we are to reduce overall energy consumption, every one of us must use less — yet very few individuals are taking meaningful steps. Some examples:

When governments tell individuals to take steps to reduce energy consumption — steps that cost them personally, like a carbon tax or a road toll — many people push back. Voters dismissed a government in Ontario that drove up their electricity rates, some other provincial governments refuse to fall in line with federal carbon-pricing proposals, and opposition parties in Alberta and federally are campaigning with some success against carbon taxes. And a recent Nature editorial noted that “climate debates depose a third prime minister” in Australia.

So if (nearly) every individual in the developed world continues to demand more and more energy — how can we possibly consume less fossil fuel and produce fewer emissions? Even anti-fossil fuel advocates like David Hughes (Post-Carbon Institute, Canadian Centre for Policy Alternatives) are beginning to admit reality. In his recent report Canada’s Energy Outlook, he states:

“Environment and Climate Change Canada’s pan-Canadian framework for emissions reduction by 2030 is an aspirational document with little quantitative information on how much individual measures will cut emissions,” and,

“Development of up to 101 new Site C sized dams and 108 new [nuclear] reactors, as called for in some of these scenarios, indicates the scale of the problem in reducing emissions.”

In other words, there is absolutely no way in the foreseeable future we can build sufficient non-CO2-emitting power generation to fulfil the needs of Canadian society.  And we can draw that conclusion without even talking about intermittency of power output from solar and wind, and the time it will take to develop effective and economical electrical storage at a useful level.

What about other countries? Outside the OECD, energy demand is skyrocketing as people strive to improve their health and lifestyles by purchasing modern, energy-consuming amenities (Figure 1). 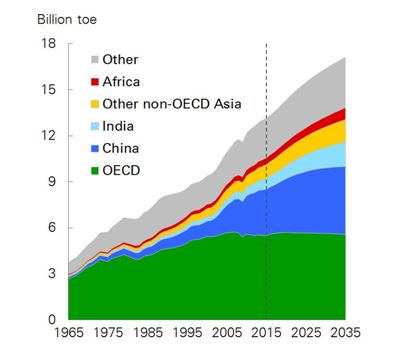 While some developing nations attend climate conferences and express lofty goals for bringing on renewables and limiting growth of fossil fuel consumption, the reality is that they want cheap, reliable, plentiful electricity and fuels — just as we do in North America. At the Global Petroleum Show in Calgary this year, companies and governments from around the world attended with one common goal — to attract investment and technologies to help them find and develop new oil and gas reserves to power their economies. China, India, Pakistan, Brazil, Argentina, Mexico — all have huge oil and gas potential, and all are working hard to bring it onstream.

So to summarize: many governments in the most-developed countries say they want to reduce greenhouse gas emissions, but they are failing because too few citizens will make the individual energy consumption sacrifices required. People in developing countries want modern lifestyles and energy consumption — and while they may object to real air pollution (smog and harmful chemicals), carbon dioxide concentrations do not concern them. So the projections of increasing worldwide fossil fuel consumption in the coming decades make perfect sense, regardless of emissions agreements and climate change concerns.

Next month, I’ll examine what the oil and gas industry needs to do worldwide in the coming decades to meet the challenges of ever-increasing demand.