There has been a dramatic decline in AECO futures pricing over the past six months, with the average futures price from 2018 to 2021 having fallen from $C 2.36/GJ in July to $C 1.57/GJ today. At the current price, a molecule of natural gas in Alberta is trading at a fifty per cent markdown to Louisiana’s Henry Hub. 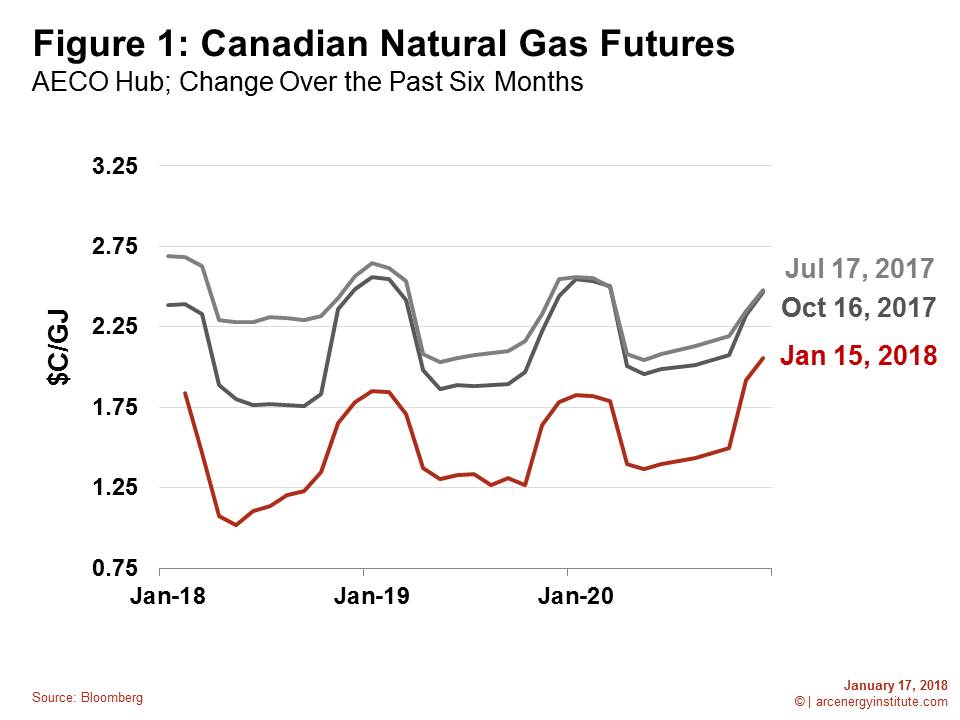 Problems for AECO pricing began this past July, as a result of maintenance outages on TransCanada’s Nova Gas Transmission System (NOVA). It was almost the end of October before the issue was resolved, and in the intervening time period the price was abnormally low and extremely volatile.

The situation was expected to improve in November as construction work on NOVA wrapped up and a new competitive toll agreement on TransCanada’s Mainline boosted exports by 0.7 bcf/d. However, the market has remained oversupplied due to a surge of new Western Canadian production at the end of 2017, up about 10 per cent. As a result, long-term prices for AECO took another step down. The weak gas price also impacted the value of E&P equities. Comparing a group of gas-weighted Canadian producers, equity values are down about 20 per cent over the past three months.

While the situation is challenging, solutions for ironing out the price dislocation are forthcoming. On the supply side, economic theory predicts less supply at lower prices. Already a few producers have downgraded their 2018 production and capital spending guidance in response. More revisions are likely.

On the demand side, growth is expected. Based on announced expansion projects to 2020, natural gas exports from Western Canada to Chicago and the U.S. West Coast could grow by one bcf/d. At the same time, growing domestic consumption from power generation and oilsands should add nearly one bcf/d of demand. TransCanada has also announced plans for more firm service between AECO and the Empress/McNeill border, a critical bottleneck point. Further out, increased natural gas flows into Eastern Canada are possible on the Mainline, and other U.S. pipeline expansions may also happen.

While the development of Canadian LNG has been slow, shipments of chilled gas from British Columbia’s west coast to Asia could still become a reality. After all, weak prices greatly increase the odds that Canada will participate in the next wave of LNG development, which may be coming sooner than first expected. Compared with suppliers on the U.S. Gulf Coast, B.C. LNG’s advantages include lower feedstock prices and a shorter shipping distance to Asia.

Arbitrages always get resolved, and often faster than expected. A classic example was the deep Canadian crude oil price discounts that were realized between 2012 and 2013. The initial solution to the problem was increasing shipments of crude-by-rail. Over the course of 2012 and 2013, rail car shipments went from almost nothing to over 200,000 bbls/d. Low prices also triggered changes to the Enbridge Mainline. Compared to back then, optimization and debottlenecking of the system added about 600,000 bbls/d of extra capacity, not far off what the Keystone XL pipeline would transport if it had been built.

The free market has ways of sorting out inefficiencies. The economic law of one price — the principle that a product must sell for the same price in all locations (net of transportation and other fixed factors), will eventually take hold. Fifty per cent discounts don’t last forever.