Analysis: Crude Reality: The End Of Oil Is A Good Ways Off

China’s oil imports were up last week, with month-over-month imports increasing by 20 percent. This year, oil demand growth will register well above the 10 year average.

Despite the current trend of increasing consumption, the “end of the oil age” is a frequent news headline because of the threat from electric vehicles (EV). However, we shouldn’t forget that a barrel of oil goes to many different market segments beyond passenger wheels, and these other markets have a lot of pull that transcend the usual “end of oil” narratives.

Let’s dissect a barrel of consumption. Figure 1 breaks out the uses in the international arena. 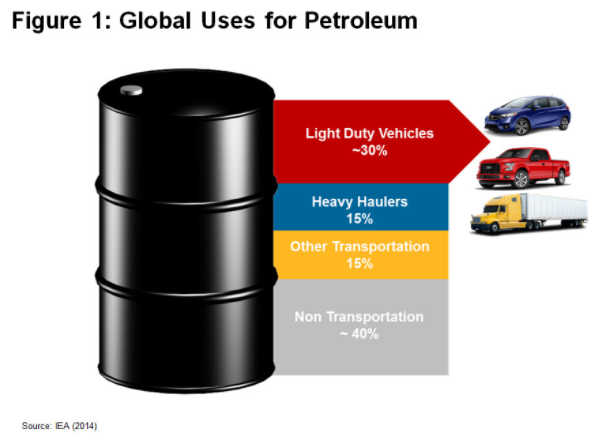 Demand from individual passenger cars and trucks, also known as light duty vehicles (LDVs) makes up less than 30 percent of global consumption. Compare this with the United States, which consumes over 40 percent of the barrel for LDVs. It may be no surprise, but one reason that Americans have oversized demand is because they travel more miles and drive larger vehicles.

Cheap oil is proving that Americans are not unique in their inclination for large vehicles. JATO Dynamics (an automotive research provider) predicts that next year more than half of all global car sales will be oil thirsty sports utility vehicles, compared to 40 percent in 2015.[1]

Despite being a frequent topic of conversation, EV numbers are still small. Globally, EVs (including plug-in hybrids (PHEV) and pure electric models) make up 1.1 percent of new sales, and 0.2 percent of the nearly one billion passenger vehicles on the road. In the United States, generous federal subsidies were introduced in 2012 aiming to boost EV sales. In some states, American EV buyers receive up to US$13,000 off the sticker price when combining federal and state level incentives. But even with big financial breaks, electrically powered wheels are only 0.9 percent of new U.S. car sales and 0.5 percent of the fleet; not far off the global average.

Today’s EV offerings target a subset of all LDV demand, mostly focused on the smaller passenger car segment. However, this is changing.  New, larger EV models are already available as PHEVs. PHEV models operate in electric only mode for shorter distances, with a back-up combustion engine for longer drives. Large PHEV models can already travel 30 miles or more in electric mode. Considering the majority of miles travelled are for short distances, PHEVs will consume much less oil. Also assuming ongoing improvements, larger pure EVs —  like the already announced Tesla pickup truck —  are not completely out of the question longer-term.

Even if you assume EVs eventually substitute a large piece of LDV oil demand —  such as the extreme adoption scenario that all countries ban the sale of combustion engines by 2040 —  oil demand remains stubbornly high for more than a few decades because of the installed base of piston-driven vehicles and the timeframe for ramping-up EV sales (see past ARC commentaries on electric car adoption and implications for oil demand).

Other transport demand uses another 30 percent of the barrel; almost half from heavy haulers for trucking freight with the rest from other transport modalities including buses, ships, rail locomotives and airplanes. While oil is expected to dominate these segments for many decades, some early stage electric technologies are being developed.

Cummins, Tesla and Daimler are working on electric semi-trucks. Wright Electric is advancing plans for electric passenger planes (large body aircraft that would service short-haul flights). Meanwhile, Airbus, Rolls-Royce and Siemens have announced a partnership for developing a hybrid-electric plane. And, although they constitute a thin sliver of oil demand, electric transit buses are already on the road in some cities.

Another fact to consider when contemplating the future of oil demand is the relatively low use in developing countries. On a per-capita basis, developed countries like the U.S. and Canada use about 21 barrels annually. More energy efficient mature economies like Germany and Japan consume half that amount. Meanwhile citizens in emerging economies consume less than one-tenth of North Americans. China uses 3.3 barrels per person annually, and India and Africa use about 1.3.

Industrializing mega-economies like China and India are still in their thirsty stage of energy use. LDVs aside, demand from the rest of the barrel is growing at about four percent in emerging economies. Considering there are few near-term alternatives for this slice of the barrel, this suggests a lengthy runway for this part of oil demand.

Even assuming an aggressive electrification of the light-duty segment, 70 percent of global oil demand would remain intact. While electron powered heavy haulers or planes could eventually threaten part of the remaining oil demand, the commercial potential and timing of these early stage technologies is still a guess. In the meantime, oil demand’s upward momentum remains unstoppable, driven by emerging economies and cheap oil that is stimulating greater consumption. Considering these dynamics, the “end of the oil age” seems a good ways off.