Energy security: in Canada, we don’t worry about it. We are one of the world’s largest exporters of energy including oil and gas, electricity and uranium.

Over the last two weeks I have been visiting India, one of the world’s largest importers of energy. I’ve had the opportunity to visit different parts of the country and speak with energy producers, policy advisors and researchers. I also spent a lot of time with the emerging and growing middle class.

But the GDP statistics are an abstraction. They miss the key point behind economic growth: people simply wanting better lives. Air conditioning matters in India in the same way that heat matters in Canada. They are constructing new apartment buildings and office towers, and increasing the number of cars to get around. There are lights in the rural areas, and ambulances to take people to the hospital. There are more jobs and better paying jobs. And perhaps a few luxuries.

This type of development requires energy. Lots of it. India is consuming about twice as much oil as it did 15 years ago. And it’s not done—the country’s energy use would have to triple to reach the amount that China uses today.

The chart below shows from where India has secured its oil imports this year. 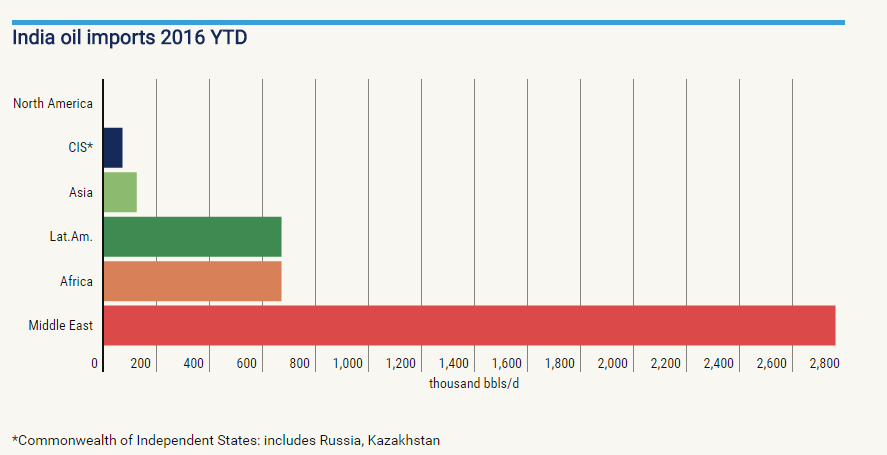 For just a moment, consider how the world looks from a place like India. The energy security issue looks very different when your country is a net importer. How secure would you feel if 80 per cent of your oil is imported and two-thirds of that supply comes from the Middle East?

And what would you do about it?

As a country that spends over $200 million per day on foreign oil imports, India has been a big proponent of green energy, pushing hard to move forward with solar, wind, geothermal and other renewables. In 2002, only 3.3 per cent of electrical generation capacity was renewable. Last year it was 13.4 per cent.

There is just one problem: green energy supply simply is not enough to meet demand for the foreseeable future. On a per capita basis, India uses 1/20 of the energy that we use today in Canada. Solar and wind are a priority, but by all credible forecasts, Indian oil and gas consumption will continue to grow quickly. Oil use is expected to double before it goes back in the other direction.

As such, it is a strategic priority for India to diversify its source of imports. Over the last few years, Indian oil and gas companies have done deals with countries like Russia and Venezuela to secure supply diversity.

India also believes it needs a strong military deterrent to protect its supply. The country has invested heavily in its naval capabilities. It has the sixth-largest military budget in the world and the stated objective to move from a 41-ship to 200-ship navy in the coming decade.

India is not alone in its concerns about energy security. There are several other Asian countries in a similar situation:

Over the last 15 years, all four of China, India, Japan and South Korea have also built up sizeable strategic oil reserves as an insurance policy. Energy security is a very big deal when you are importing a large portion of your energy.

And security concerns will increase with Donald Trump taking office in January 2017 as the U.S. position on global security questions becomes more uncertain. It is possible that energy security could be a source of conflict in the coming years.

Democracies like India, South Korea and Japan may decide that they need more of their own muscle. Don’t be surprised to see an increase in military budgets in Asia.

Whether a Canadian pipeline is built or not will not change the demand requirements in India, China or elsewhere. Let’s not fool ourselves: these countries are tilting towards green energy, but they will continue to buy and protect the flow of the resources they need to give their people a better life.

Many Canadians have an idealistic view of our role in the world—whether as peacekeepers to mediate conflict, or sheltering refugees to protect the victims of conflict. With the expected re-orientation of U.S. foreign policy in the coming years, the security equation may change for large energy importers.

Canadians need to take a different view of our resources. We are not a big country with hard power, but contributing to global energy supply diversity could be one of the most important things we do in the coming decade to help make the world a safer place.