Analysis: A Disproportional Emphasis On Upstream Oil And Gas Is Not A Solution For Reducing GHGs

Here is an undeniable, yet underappreciated fact: the vast majority of greenhouse gas (GHG) emissions from fossil fuels (coal, oil, and gas) are actually released into the atmosphere when the fuels are burned by a consumer.

Only a small fraction comes from the producers who extract oil out of the ground and pump it into pipelines.

Since the mid 1800s, humanity has harnessed the energy in coal, oil and gas to power our economic growth and prosperity.

To liberate the energy stored in hydrocarbons — for turning the wheels of cars or generating heat for our comfort — the fuels must first be combusted, generating carbon dioxide (CO2).

On the liability side of the societal ledger, CO2 is a greenhouse gas that traps heat in the earth’s atmosphere.

As our worldly use of fossil fuels has increased, so has the amount of carbon dioxide. In 2015, the level of CO2 in the atmosphere hit 400 parts per million (ppm).

That’s a level that is more than 40 per cent higher than at the start of the industrial age, and only 11 per cent below the 450 ppm threshold estimated by the Intergovernmental Panel on Climate Change (IPCC) as critical for limiting the harmful implications from the earth’s warming.

GHG emissions are generated across the lifecycle of fossil fuel production and consumption. Figure 1 shows the breakdown of the emissions from crude oil — from the well to combustion. 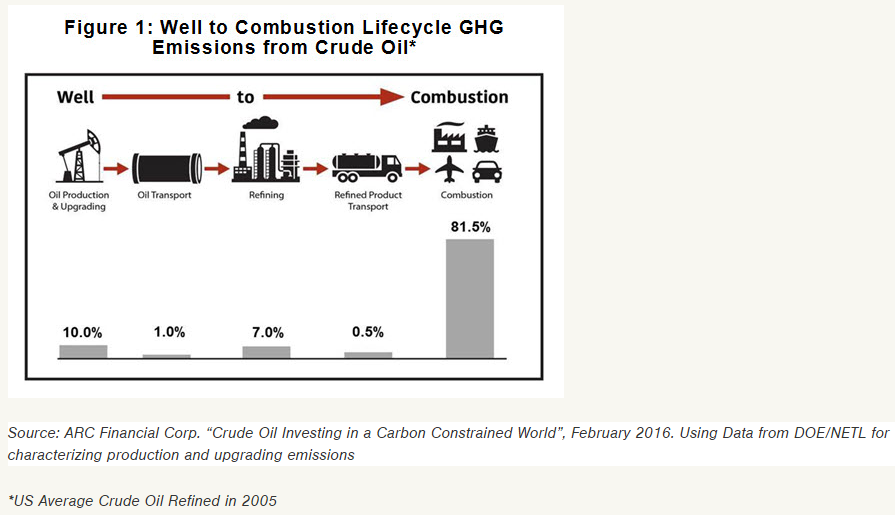 CO2 is first generated by the upstream industry, as energy is used to liberate oil from the ground and transport it to a refinery.

There is more CO2 liberated when the oil is refined into light transportation fuels like gasoline and diesel, and when these fuels are transported to the retail station.

And lastly, there are CO2 emissions when the refined fuel is consumed by a combustion engine.

The majority of GHG emissions — over 80 per cent — occur in the hands of the end user, during the combustion stage when a car’s ignition is turned on, when a jet-engine airplane fires up its turbines, or when a diesel locomotive pulls heavy freight down a railroad track.

For other fossil fuels, like natural gas, it is a similar flow. Over 80 per cent of all lifecycle emissions are generated in the end-use combustion stage; for instance when the power plant burns natural gas to generate megawatt hours of electricity or when a furnace kicks-in to warm a home.

The fact that most GHG emissions are generated in the sway of the consumer is sometimes ignored in the proposed solutions for reducing emissions.

Take for example groups that advocate the divestment of upstream fossil fuel producers as a means for reducing global CO2 emissions.

Figure 1 highlights why a disproportional emphasis on the upstream, while ignoring the overwhelming contribution of the downstream, is not a solution for reducing GHG emissions.

Upstream producers account for only 10 per cent of all of the GHG emissions from crude oil, while the bulk of the issue — 81.5% on average —is downstream, where the fuels are burned by consumers.

Divesting of fossil fuels in an investment portfolio is not much more than symbolic action, unless investors and consumers also divest of the real drivers of most of the GHG emissions — the manufacturers of the devices that burn them.

An honest assessment leaves very few (if any) investable companies in a portfolio, since almost all of the world’s commerce relies on fossil fuels directly or indirectly, from beginning to end-use consumption (especially the latter).

Identifying where emissions are generated across the lifecycle of fossil fuels is a useful framework for evaluating the effectiveness of proposed solutions to reducing GHG emissions.

The world is unlikely to achieve meaningful reductions in CO2 unless the under-appreciated issue of end-use consumption is acknowledged.

Jackie Forrest is vice-president of energy research with ARC Financial, where she is responsible for actively monitoring emerging strategic trends related to Canadian oil and gas. Prior to joining ARC, she was the leader of North American crude oil research for IHS CERA.