Make no mistake about it, Canadian gas producers are in an intense market share battle with their American counterparts.

Producers in Pennsylvania, Ohio, and Virginia are ramping-up production and further encroaching into Western Canada’s traditional markets in the east.

Here’s the good news: Canadian producers are well positioned to fight back against the American assault. The shale gas fields in northeast British Columbia and across the border in Alberta are endowed with top tier rocks. Canadian companies have innovated and driven down costs.

Plus, Western Canada has a strategic advantage from its long-established pipelines, connecting world-class gas fields to its traditional export markets across the continent.

However, there is vulnerability in defending the eastern Canadian market. The high transportation costs through the TransCanada Corporation (TCPL) Mainline — the half century old pipeline that connects Western Canada gas with Ontario — make Canadian gas uncompetitive relative to emergent U.S. supply.

As a result, Western Canada has been losing market share on its home turf. In 2006, before the U.S. shale gas revolution, the Mainline supplied the majority of Ontario and Quebec’s gas. Since then, American supply into Ontario and Quebec has grown by one bcf a day, at the expense of western Canadian producers providing gas via the TCPL Mainline (see Figure 1).

But now, in a deal that seemed nearly impossible six months ago, TCPL has announced an “open season” — a bidding process for producers to secure contracted capacity — that will give western Canadian producers a competitive boost in eastern markets.

If, collectively, Canadian gas producers sign up for a multi-year commitment to send 1.4 bcf per day of gas to Ontario on the Mainline, then the cost for transporting a cubic foot of gas would be nearly cut in half from today’s rates.

For Calgary-headquartered producers, a long-term commitment for flowing gas into Ontario is a new strategy — one that assumes different business risk than the traditional model of selling gas in Alberta, and one that understandably causes some uneasiness due to the contractual commitment. But like any battle, new tactics are often needed to win.

One concern Canadian producers have with the deal is that the firm Canadian flows, along with continued U.S. expansion, could create a price war in Eastern Canada. While this American attack scenario could play out, it is not guaranteed.

To bring any more U.S. gas into Canada, new infrastructure is still needed. A consummated TCPL Mainline deal should act as a deterrent for new U.S. investments like the Nexus and Rover pipes. However, even if American supply grows, and a price war was to ensue, the lower tolls give Canadian producers a strategic advantage. 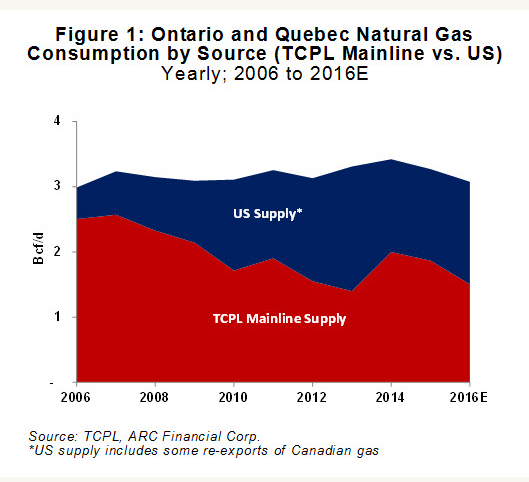 Even so, the downside price risk does not necessarily disappear without the open season. It just shifts up the pipe to Alberta. Since, on average, the relative price at AECO (compared with other continental pricing hubs) would likely be lower without sustained flows on the Mainline.

Another concern with the open season centres on the long-term, future natural gas prices at AECO and at Dawn. Today’s futures market offers similar economics by using a financial agreement, rather than contracting for physical deliveries with the Mainline’s open season — so why bother signing up?

The counter is that the futures market is as the name implies, in the future, and therefore a theoretical price. In reality, the liquidity doesn’t exist in the market to lock in significant volumes at those prices.

Also, history has proven that the futures market is rarely an accurate predictor of actual prices. In fact, a successful open season process is already being partially priced into the futures market — so without the minimum subscription volumes any futures price advantage in the price difference between AECO and Dawn would likely diminish.

While there are concerns for individual producers, TCPL’s open season is a win for the industry as a whole. Producers benefit by gaining a more competitive, larger-scale industry with more opportunity for growth than they would have otherwise had.

How much room is there for growth? The volumes associated with the current open season basically sustain Canada’s existing market share in Ontario and Quebec (this year, the Mainline is estimated to supply 1.5 bcf per day of the gas consumed), but there is still more potential. Remember that the Mainline pipe has more available capacity. In 2006, the western portion of the pipe carried almost two-times more gas than today. Assuming more open seasons at competitive rates, it is possible to reclaim some of the one bcf per day lost to the Americans in Ontario and Quebec since 2006.

Right now all this is future battle planning for a market push to the east. The first critical step is holding the front line in Eastern Canada by defending the current market share. That, at least, should be assured if the bidding for the open season is successful on Nov. 10.

This article was originally published on the ARC Energy Ideas blog.